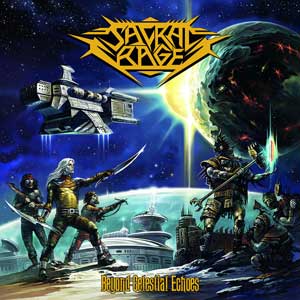 The second album is probably the most important release for a band. It’s what we call “make or break” and can equally establish or ruin a career. Sacral Rage are at that exact point and they seem to know it very well. They didn’t rush to the studio eager to present the successor for Illusions In Infinite Void. They manifested patience and took their time in order to perfect the entire Beyond Celestial Echoes package. Since I have been monitoring the band from its very beginnings, I know for a fact that it’s comprised of musicians that don’t rest or count solely on the things already achieved. On the contrary, they seem to be on a constant creative process with the collective mind of the band hyperactively seeking progress and evolution.

With these facts in mind, I pushed play. The shock came almost immediately. Even while writing these lines, several spins later, I find it hard to harness my thoughts. One thing is for sure though. BCE is in fact the next step. The step beyond. It represents the evolution of four musicians, the maturing in terms of songwriting and musicianship for a team that remains intact since conception (a key element, very rare these days). I would like to use Vektor as an example, a band that could be filed as a sonic relative to Sacral Rage, in order to explain what the latter have accomplished in BCE. Like DiSanto and his team harnessed the anarchic energy of Black Future and managed to channel it towards Outer Isolation without any compromises or reductions, so did the Athenian quartet by keeping all the crucial elements of Illusions intact while enhancing them in order to produce the controlled chaos that is BCE. In an almost magical way, Beyond Celestial Echoes sounds more accessible when in reality there are one hell of a lot more things going on and more composite elements that govern the songs.

One of the first things I noticed was the sonic upgrading of the bass guitar and its elevation to its well-deserved crucial role, on par with the Vektor-ish drumming and ingenious pace making. The guitar work is once again out of this world. Riffs success one another in a constant barrage that proves a real challenge for mind and ears to keep up. On the already illustrious vocal department, the repertoire has been enhanced with King Diamond inspired elegies and imposing multilayered choruses that contribute the most into creating an awe inspiring atmosphere. There is a clarity in the sound, a metallic gloss that reinforces the spacey feeling that the group wants to present. Mysterious sounds can be heard in the background, sending shivers down the spine. Do yourself a favor and use headphones. Exclude all external sounds and dive deep into its black and cold nothingness. It has been a while since the last time I connected and visualized the songs of a current release. I really felt wired to a virtual reality that offered vivid and lifelike visions.

There is no point in talking about specific songs because BCE is not an album with hits but a grand and ambitious creation that works when treated as a whole. The Sacral Rage cauldron mixes a variety of obvious ingredients but what makes the real difference is the secret spice added and the careful brewing in order to present their very own and unique musical creation.