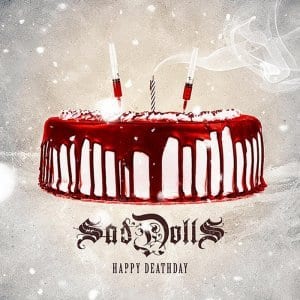 When “About darkness…” was released I remember writing about this band… “They are meant to achieve a lot”. Now that I know that they have singed with the Italian label, now that I found out the former HIM manager is handling their promotion, now that I’m listening to their sophomore album… I just couldn’t be gladder! They have already achieved a lot and they fight to open more doors, to walk more roads, to surpass the extravagant. “Happy Deathday” is a splendid class certificate; it’s actually their passport to abroad success and probably the best black album of the year!
Paradise Lost and HIM are now married, they have a bunch of kids, they all live Gothily Deather After and we are all invited to listen to their latest blackstuff. Apart from the above mentioned bands, SadDolls also mention Killswitch Engage, To/Die/For… The band aristotechnically bolters their influences, portraying “immediate” compositions, beautifully constructed, right to the point, full of essence and melody. Keys on “Embrace the dark” introduce a fantastic loop and then guitars blow us away. Ballad-like verse, top gear over chorusing. I don’t want to suggest any songs to listen from the bouquet, you simply gotta listen to the whole freakin’ album! It’s so attractive I can not possibly leave any songs out. I’d probably take a lil’ wager about the first video of this album. Could it be “Killing sorrow”? “Bloodred” maybe?
It is essential to write about the album guests for this special Deathday. Many amazing musicians recorded for this specific work and we are proud to mention them all. Roberth Karlsson (Scar Symmetry), Juska Salminen (To/Die/For, Ex-HIM), Jape Peratalo (To/Die/For), Morgan Lacroix (Μandragora Scream), Alex Flouros (Fragile Vastness, Seduce The Heaven), Sakis Darkface (W.E.B), John McRis (Anorimoi – the album producer as well), Manos Fatsis (Dark Nova).
“Watch me crawl behind” has been re-arranged for this one; this is a GREat selection, it’s one of the best tracks of the previous album. Can’t wait to see them live on stage. Eeerrr.. Are you guys gonna play live, too? At the release party?