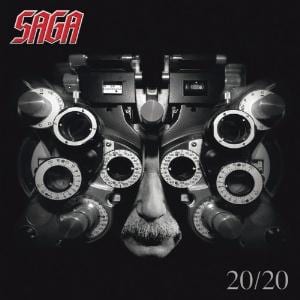 Huge Prog Rocking band from Canada, true AOR lovers as well, are back with their twentieth album (!) and some more give aways… As you guys and gals know already, Michael Sadler has returned to the band, we have also written that over the “Heads or tales live” album review. The band features a new drummer, Mike Thorne, whilst the album title is something really special for keyboard/clarinet sensation, Mr. Jim Gilmour. Gilmour had an eye surgery thing and “Twenty out of twenty” is the definition of perfect sight. It’s another way to wish for best recovery, right?
The band is back to their familiar territory, catchy music featuring difficult musical parts, which don’t make you suffer. They just make your day, the way they are built. “Spin it again” is undoubtedly a hit, the chorus is radio friendly! “Another day out of sight”, written in 3/4 rhythm, possesses a symphonic hype, backing vox are adding to it, one could state they are even baroque!
What is about to sweep you off your feet though is the keyboard magic. Yeah, I know, them guys have a thousand more features to drive you insane, yet those keys are out of here! Those brilliant sequencers… You’ll listen to “One of these days” and you’ll remember me writing that… Flower Kings; Yeah, you bet! “Ball and chain” has come with a catchy lil’ chorus and a fantastic piano passage. Remember me praising the keyboards? Okay, time for “Lost for words”, which is one of the most crystalline songs on the album. Sadler’s voice on the lead; that one could easily be a Fleetwood Mac mega hit!
There’s gonna be a special album edition, with a bonus DVD, “narrating” recording procedures and stories and such. You gotta listen to this one, the band is so spacey!