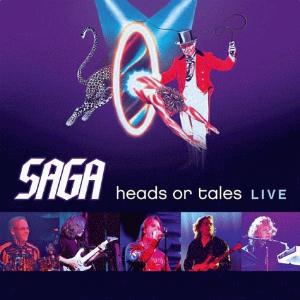 The Canadian superband did the “Heads or tales” tour within 2009 and 2010, they also came to Europe and had a truly fantastic time here… As you can anticipate and understand, the “Heads or tales” album was being played from beginning to end, whilst we find, as the band’s singer on stage, Rob Moratti and not Michael Sadler. Yet, I honestly believe that even the die-hard fans, following the band since the 70’s, loved Rob as everyone else did! It simply couldn’t work differently, Moratti is an amazing singer and performer and the songs came out just brilliant! Plus, with Sadler back in the band now, this “souvenir” from the Moratti-era is even more special.
Authentic AOR, featuring lots of Progressive Rock elements; this is a band on fire! They sound so huge, so majestic, so live… It’s pure magic the way sequencers bind with the organs. Mighty Epic AOR, guitars and keyboards sound like the dreams we’ve been having for a long time now and the general feeling is the one of the grand bands of the genre. Usually I tend to write about these albums “I’ve got the impression that this band and the other band are watching the show”… Well, in this case, Yes, Genesis and the rest of the bunch are sitting front row center and admire… and they keep on admiring!
“Heads or tales” was originally released in 1983, it was a key-album regarding the band’s career, successful and all and their passport to the European crowds. Now, the live “Heads…” is just perfect, you gotta listen!