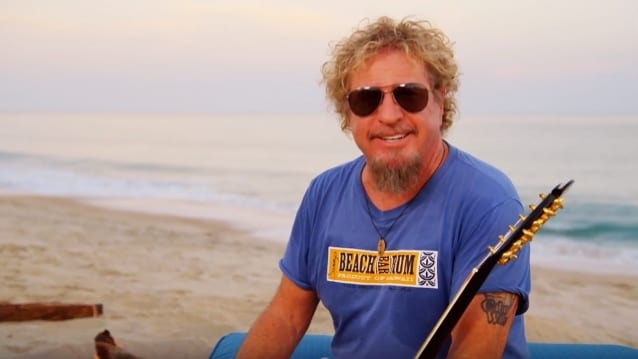 Sammy Hagar spoke to Broward Palm Beach New Times about “Space Between”, the upcoming first album of all-original material from THE CIRCLE, his critically acclaimed supergroup also featuring Michael Anthony, Jason Bonham and Vic Johnson.
“It’s about the misconception that money is the root of all evil, because the truth of the matter is, that it isn’t money at all,” Hagar said. “You can feed the poor, you can heal the sick, you can make people happy, you can stop a war with money, but it’s greed that is the problem. That’s what the whole record is about. It’s what I discovered by being both rich and poor.”
Hagar added that “Space Between”, which is tentatively due in January 2019, will likely be his last album, and he hopes to get a Grammy for it.
“That’s my bucket list: to have one more credible musical experience in my life,” he said. “I think I did it, and I hope it’s as good as I think it is. I’ve been double-parked in the rock ‘n’ roll business for 40 years, and I want a stamp on my validation so I don’t have to pay to get out.”