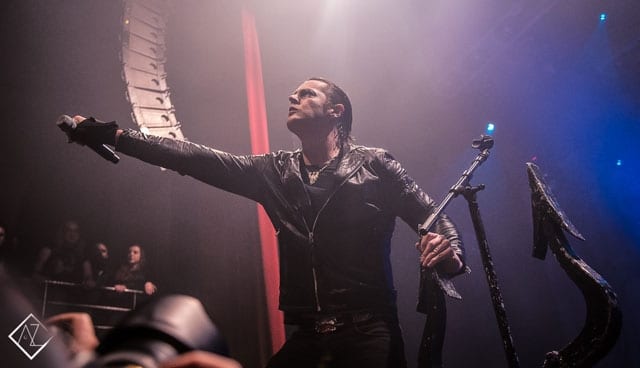 Satyricon is a band that has been criticized a lot in their career (rightfully or not, that’s another issue) but they are still one of the most recognized bands in extreme metal. Nine years after their last visit in Greece, the first stop for the tour to promote the great “Deep Calleth Upon Deep” was in Fuzz Live and the dark and rainy night set the mood for what it was about to follow (all-time classis cliché).

Right on time, On Thorns I Lay hit the stage. A band with a large back catalogue (shortly they will release their eighth record “Aegean Sorrow”), with variety in their music and with a big absence some years ago. For this night they chose only songs from their atmospheric doom/death metal era. Very good performance with great sound, they showed that the scene is better with them and earned the warm applause of the audience. Their return three years ago seems to be permanent.

The time was passing slowly until the final details. The venue was now almost full, the lights went out and after a short intro Satyricon entered the stage. Satyr and Frost chose four other musicians to accompany them in this tour (two guitarists, one bassist, one keyboard player). One of them, the Hungarian Attila Voros played in the same venue eight years ago with Nevermore and he will also participate in Sanctuary’s farewell tour. They started with “Midnight Serpent” and the band’s intensity was amazing. Great sound and performance from the beginning, the Norsemen showed right from the start what was about to happen.

Satyr was awesome, but I have to mention that maniac behind the drumkit. Frost can easily tear down a house. His style is not just fast and brutal, but he fills the songs ideally with his own unique way. One of the greatest drummers in the metal scene. The setlist had mostly songs that were expected to cause panic (on “Black Crow On A Tombstone” and “Repined Bastard Nation” shit got real) while there was also a surprise with “Walk The Path Of Sorrow” from their debut album. A very nice spit to the face of those who read the setlist of each band, because it wasn’t in their most recent shows. The same happened with “Die By My Hand”, a situation that made some to shout desperately songs that they have studied to listen to. The show continued in a frenzy way, Satyricon chose their most known songs for last, completing a triumphant performance after about 100 minutes on stage.

The truth is that I went to Fuzz Live without knowing what to expect. I don’t mind saying that their latest works didn’t enthuse me very much. But after this night, I was thinking that it has absolutely no meaning of trying to categorize their music. You can say it’s black metal, you can say it’s extreme metal, you can even say that it’s noise rock with jazz influences. Put any label you want, the truth is that Satyricon chose to follow their own musical path, ignoring haters and doing whatever they wanted. Good for them. They came, they saw, they kicked asses, they left. So simple.

Setlist: Midnight Serpent, Our World It Rumbles Tonight, Black Crow On A Tombstone, Deep Calleth Upon Deep, Walker Upon The Wind, Repined Bastard Nation, Die By My Hand, Now Diabolical, Walk The Path Of Sorrow, To Your Brethren In The Dark, The Ghost Of Rome, Transcendental Requiem Of Slaves, Mother North, The Pentagram Burns, Fuel For Hatred, K.I.N.G.