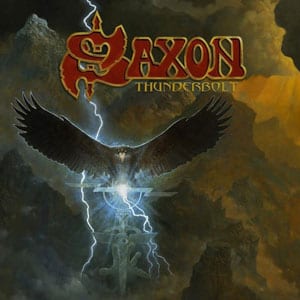 Every release of those old dogs is very interesting because Saxon is one of the most loved bands with a constant presence for the last 40 years and their legacy to our favourite music is eternal. Their shows are always a party that never fails to drive everyone in the audience crazy. That’s not the case with all their albums though.

“Thunderbolt” belongs to the category of the uneven Saxon albums in my opinion. Because it contains 4 or 5 great songs, while the rest don’t offer the same quality. Their intentions are always good and their ideas are cool, they are true to their sound, but the result is not always the best possible. The best song of the album is “Predator” with Amon Amarth’s Johna Hegg’s growling vocals. For Saxon this is something new and the truth is that fits like a glove to this extra brutal tracks, one of the most vicious songs they have ever recorded. It’s great to still try new things even after 5, 10, 20… 21 albums, it’s not something a lot of bands out there do. “The Secret Of Flight” is superb and it’s among the best of the album’s together with “Sons Of Odin”, “The Played Rock’n’Roll” with Lemmy’s recorded voice giving the instant goosebumps and the titletrack.

The rest of the lot balance between mediocre and indifferent. Of course the band’s performance is always on the red, but that’s not enough. A song cannot get better no matter how good or passionate you play it.

On the other hand having in mind the band’s greatness and legendary past you can’t but always expect the best out of them. Saxon showed several times in the recent past that they can still write amazing songs. I can never forget my first reactions to “State Of Grace” from “Inner Sanctum” (2007), or “Call To Arms” from the self-titled album (2011), or the entire “Sacrifice” album that kicked ass. It’s not easy to always come up with great songs, nobody can do it. Inspiration is not guaranteed and it’s a different story when you release an album every 2 or 3 years that one every 5 or 10. Every band has its ups and downs, so we already wait for their next effort and of course their live shows.