We stole a tiny bit of Biff’s little free time anyway to ask a few things about “Dogs Of War” limited re-release on vinyl through UK’s  Demon Records. Brief as usual he sheds some light to one of the best Saxon albums from the 1990’s.

Rockpages.gr: “Dogs Of War” was released in the middle after “Forever Free” and before “Unleash The Beast”. Would you consider it to be a step to the right direction again after the amazing “Solid Ball Of Rock” and the lackluster “Forever Free”? 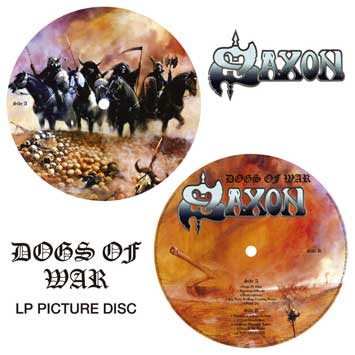 Biff Byford: Well once again we changed producers for “Forever Free” and then went back to the “Solid ball…” guy (Ed. Rainer Hansel ) for “Dogs…” I think “Dogs Of War” was our first step back to a heavier style…

Rockpages.gr:  The musical direction on “Dogs Of War” flirts with classic Saxon but it’s yet fresh, edgy, in some places more hard rock than metal, and very melodic. What were the influences that led to this sound?

Biff Byford: I think the mixture of melody and hard guitar riffs are our trade mark. Some of the songs are metal and some not… that’s our style!

Rockpages.gr: There is no bonus material here, like unreleased tracks, live material, but then again “The Eagle Has Landed II” was released shortly afterwards. Is there anything left out of it?

Biff Byford: No there is nothing left over from those sessions

Rockpages.gr: “Hold On” one of my favourites on the album sounds like a real story, is it? It might also refer to rock’n’roll lifestyle and going your own way, what would you say? Does it fit your own lifestyle? Were you always free to do whatever you wanted to, or not, and how did you cope with that?

Biff Byford: Well the song is based on an experience I had with a partner… But, loosely I wanted to write a song about lovers on the run… I think if Bon Jovi had released the song may have been a hit… I do write lyrics about surviving!

Rockpages.gr: “Demolition Alley” was dedicated to some friends of the band that got fucked in prison, and I am quoting “The Eagle Has Landed II” intro. Can you tell us the story, and how did you come up with the blues passage in the middle?

Biff Byford: You have to remember that bands have fans from all walks of life and some of them in prison… We do get letters from time to time about how our music helps pass the long hours… The blues section was just a jam we were having and it’s a bit of seventies in the break.

Rockpages.gr: “The Great White Buffalo” is the huge mid tempo epic of the album, what was the inspiration to write this one?

Biff Byford: My interest in history means I do have a feel for these type of songs. When we toured the States the first time I went to an Indian reservation in Oklahoma to look at the silver work and I met some elders who were fighting through the courts to get some land back. So, hence the song…

Rockpages.gr: Recently we see classic bands revisiting older classic albums playing them live on their entirety live, like you did. Is there a chance in the future to enjoy a special live set with overlooked material from albums like “Forever Free”, “Solid Ball Of Rock” and “Dogs Of War”?

Biff Byford: We could do that in future but we regularly play these title tracks

Rockpages.gr: On our last interview with Biff for Rockpages.gr he sounded a bit annoyed about the attitude in the band and expressed the notion that he’d release a solo album, instead of a new Saxon album. Is this still the case?

Biff Byford: No I was not annoyed with the band! What I meant  was I have been driving the band forward now for quite some time and maybe we should take a break if we all want to…

Rockpages.gr:  The ‘90s has been a tough time for hard rock and heavy metal with the emerge of Nirvana, alternative rock, and all that. How did Saxon manage to survive through all this and keep not only the ball rolling but also releasing some of their best albums, like “Solid Ball Of Rock”, and “Unleashed The Beast”, as well as “Dogs Of War”?

Biff Byford: We managed b 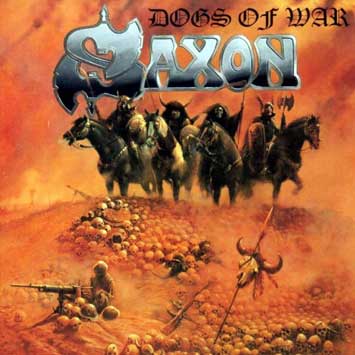 ecause we were lucky enough to have written a string of songs that people love!

Rockpages.gr:  If someone told you in 1995 that you’d have another 20 years of band career would you believe him?

Rockpages.gr:  Almost 20 years after the album’s release would you change anything to it? Do you remember if you had any different ideas back then, that it might have sounded even better? When was the last time you gave “Dogs Of War” a listen?

Biff Byford: About an hour ago before I did this interview no I wouldn’t change anything… Re-mix maybe!!!

Rockpages.gr: The album is released on vinyl, how do you see the revival of the market? Can Saxon benefit from that provided that they have “older” fans that grew up buying vinyl records, when it was the no.1 medium?

Biff Byford: I think the vinyl Market is growing stronger and stronger people are buying decks again. They want to experience the analog sound…

Rockpages.gr: Send a message to the Greek fans please!

Biff Byford:Had a great time at the festival in the mountains! See you soon! Keep the faith…