After years of anticipation the second Scar Of The Sun album is finally ready and is out since the 20th of May via the Italian label Scarlet Records. Rockpages.gr visited Zero Gravity Studios to listen to the album and discuss with the band.
With the first look on the album cover it’s obvious that the artistic quality of In Flood is a continuance of the previous one, A Series of Unfortunate Concurrencies. But the similarities to the previous album stop right there according to the frontman Terry Nikas.

1.Among Waters And Giants
The first song will be the opener for their upcoming concerts since the intro is really atmospheric and suits an amazing live performance. Rhys Fulber (Fear Factory, Paradise Lost etc) is once again the producer. Strong and crystal clear sound with a melodic and catchy chorus in which Terry’s vocal improvements are obvious. You would say that his voice brought to mind a mixture between Nick Holmes and Howard Jones.
2.All Ill-Fated Wonder
It would be a great video clip since its faster and more rhythmical from the start. Remarkable chorus and an even more remarkable ending with an atmospheric break.
3. Versus The World
Sure is the heaviest track of all which is more of a story of the difficulties and mishaps that  the band had to conquer throughout all these years. A nice mixture of In Flames meets Dark Tranquility in the verse part and mostly Paradise Lost in the melodic chorus part.
4.Sand
This is a song with the first guest appearance. The keys in this song are laid by Nick Sid of the Greek Cyanna Mercury band. It could also be the next video clip of the band since it’s the most commercial track of the album and quite slower from the rest.
5.The Truth About The Lies
A song with a faster tempo. One more dynamic and rhythmical song from Scar Of The Sun, with a catchy chorus that takes you back to a more 90s feeling. In this point is really important to mention that the main lyric theme is about social and political matters that seem to bother the band a lot.
6.Enemies Of Reason
This is the band’s 2nd music collaboration. Bob Katsionis (Outloud, Firewind etc.) is not only the keyboardist but also the mastermind behind the whole arrangement and composition of the song. Slow and atmospheric in the beginning but develops in a more up tempo bridge and chorus and ends with an impressive solo.
7.Walking In My Shoes
Scar Of The Sun chose to cover Depeche Mode. A really smart choice that does justice to the talent of the band and adjust the song to their own style just like In Flames once did with Everything Counts.
8.The Raid
The key parts are the main thing in this slow song but the guitar shines with some outstanding leads.
9.In Flood
The guest participations are completed with the appearance of the multitalented musician George Katsanos who contributes to a darker atmosphere .It is important for the listener to pay attention to the end of the song where you can listen to the sound of Theremin. The aggression in Terry’s voice contrasts with the more melodic verse that follows.
10. The Ghost Peril (bonus track)
This song is mostly connected to the first album since it was written right after its release. It is more gothic and melodic than the rest but that doesn’t mean that is out of place.

With this album, Scar Of The Sun accomplishes a different musical approach without detaching from the melodic doom gothic style introduced in 2011 through the debut album. as their first album in 2011. As a result In Flood manages to create a much more melancholic atmosphere with lyrics open to different interpretations. 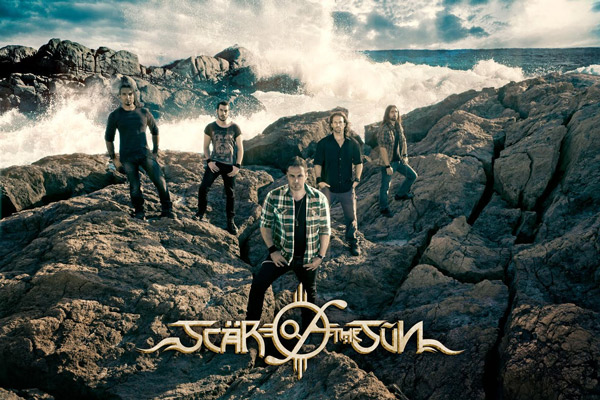