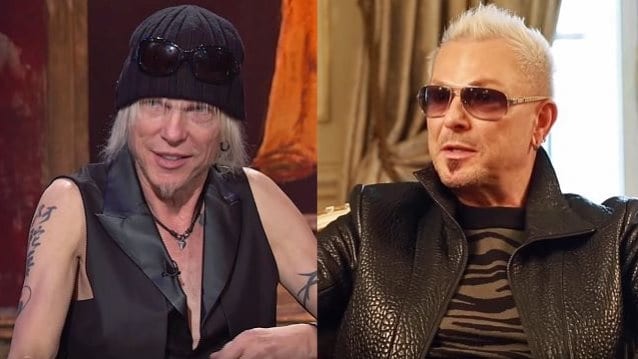 Legendary German guitarist Michael Schenker (SCORPIONS, UFO) has once again slammed his brother Rudolf, saying that the SCORPIONS axeman “steals things” and “copies everybody else who is successful.”
Michael Schenker gave a number of interviews in recent months in which he questioned his brother’s integrity, going so far as to call Rudolf “a con artist” who “completely adopted [Michael’s] image” as his own. He also denounced the SCORPIONS for “distorting” the story of his brief tenure with the band and criticized what he saw as ongoing efforts to minimize the contributions of the group’s former drummer Herman Rarebell and ex-bassist Francis Buchholz, as well as SCORPIONS’ long-running creative complacency.
In a brand new chat with the “Music Mania” podcast, Michael said: “I taught Rudolf how to play guitar, I taught him how to… He learned from me how to write songs. He wasn’t able to write any song. Everything I did with Klaus [Maine, SCORPIONS singer] he copied, and basically copied by my melodies, he copied everything. He wanted to present a fake, to be a Michael Schenker, confuse the people. And Michael Schenker was off the scene anyway; he was enjoying himself, having fun with experimenting with music, being out of the spotlight. So Rudolf had a clear way to do his thing. But I didn’t know about it. So, in the meantime, when people were asking me in the last thirty years, ‘Oh, what do you think of your brother’s success?’ I said, ‘Yeah, more power to Rudolf. I’m happy for him. As long as Rudolf is happy, I’m happy for him.’ One day I heard him coming into the kitchen at my mom’s place, and he said, ‘This fucking rat race.’ So I knew he wasn’t quite happy, even though he was successful.”