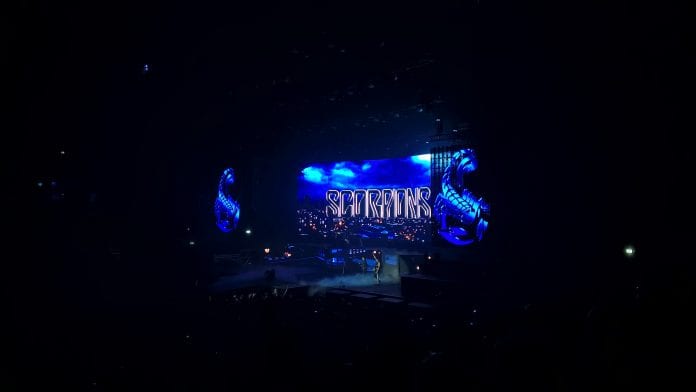 Whenever I go to a big concert like this, I always wonder who of those traveling with me, at the metro or in the traffic jam, might be going to the same place. I check t-shirts, hairstyles, age. Crossing all Copenhagen to reach from the north west to the south east, all the people I had marked as potential Scorpions fans went off at “wrong” stops. I was very disappointed thinking that the show would not be sold out – I didn’t have information on the attendance – but maybe it was understandable. Scorpions have been touring insanely, most of us have seen them quite a few times, maybe their love songs are not everywhere always in fashion as in Greece, and it was such a cold night… 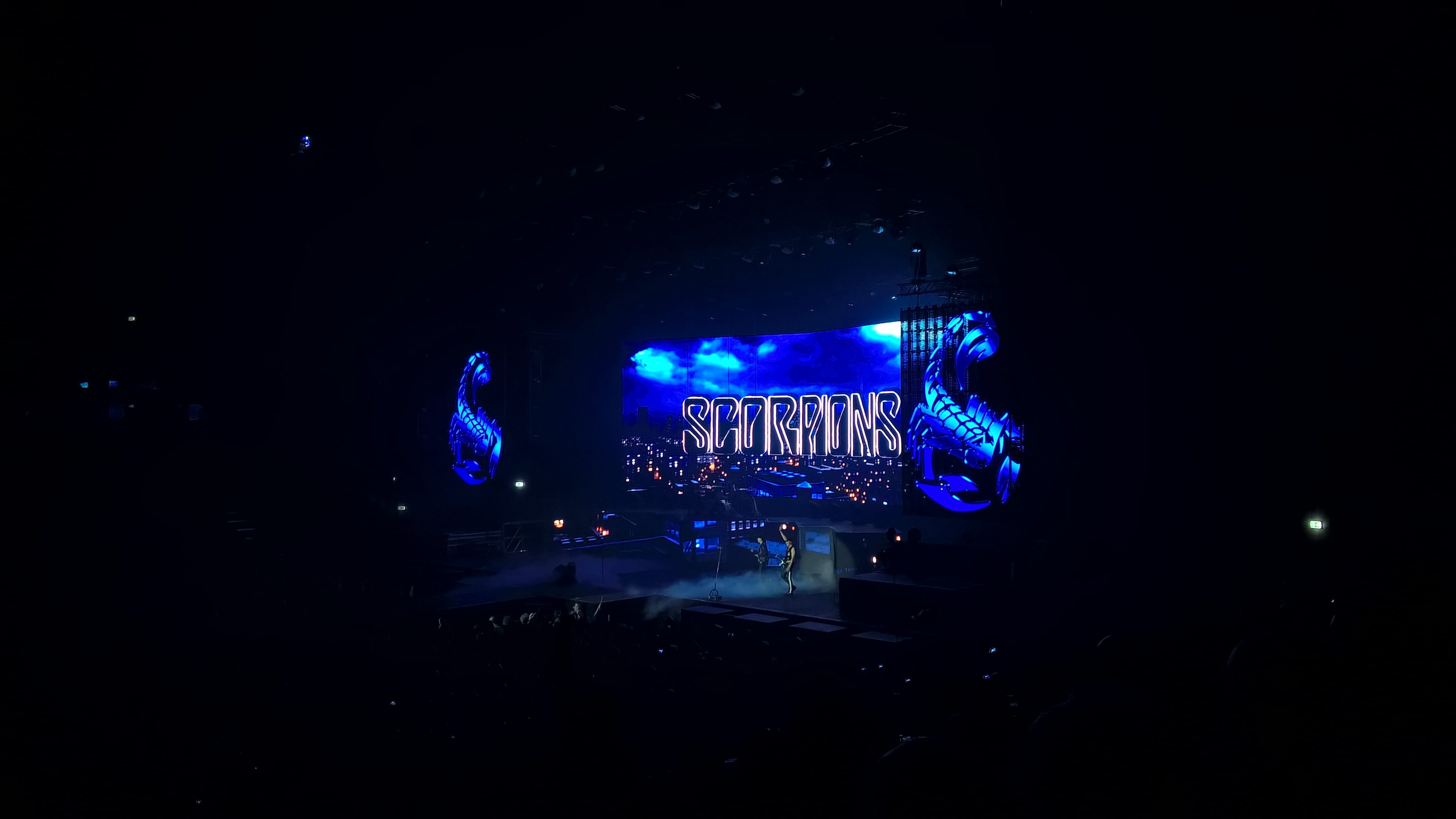 Of course I have been out in even colder nights, so that is no real excuse. As I exited the metro station, just as I try to find the general direction, I saw this huge sign on the wall of the shopping mall in front of me giving me directions: Royal Arena, 400m ahead. I crossed the shopping mall bridge, with the pub on the left playing Scorpions (apparently those love songs are always in fashion… everywhere), and now I started seeing more people and yes, the Royal Arena at some distance on my left. Finally some people going to the show. I sped up. I only had 15 min before the show started! 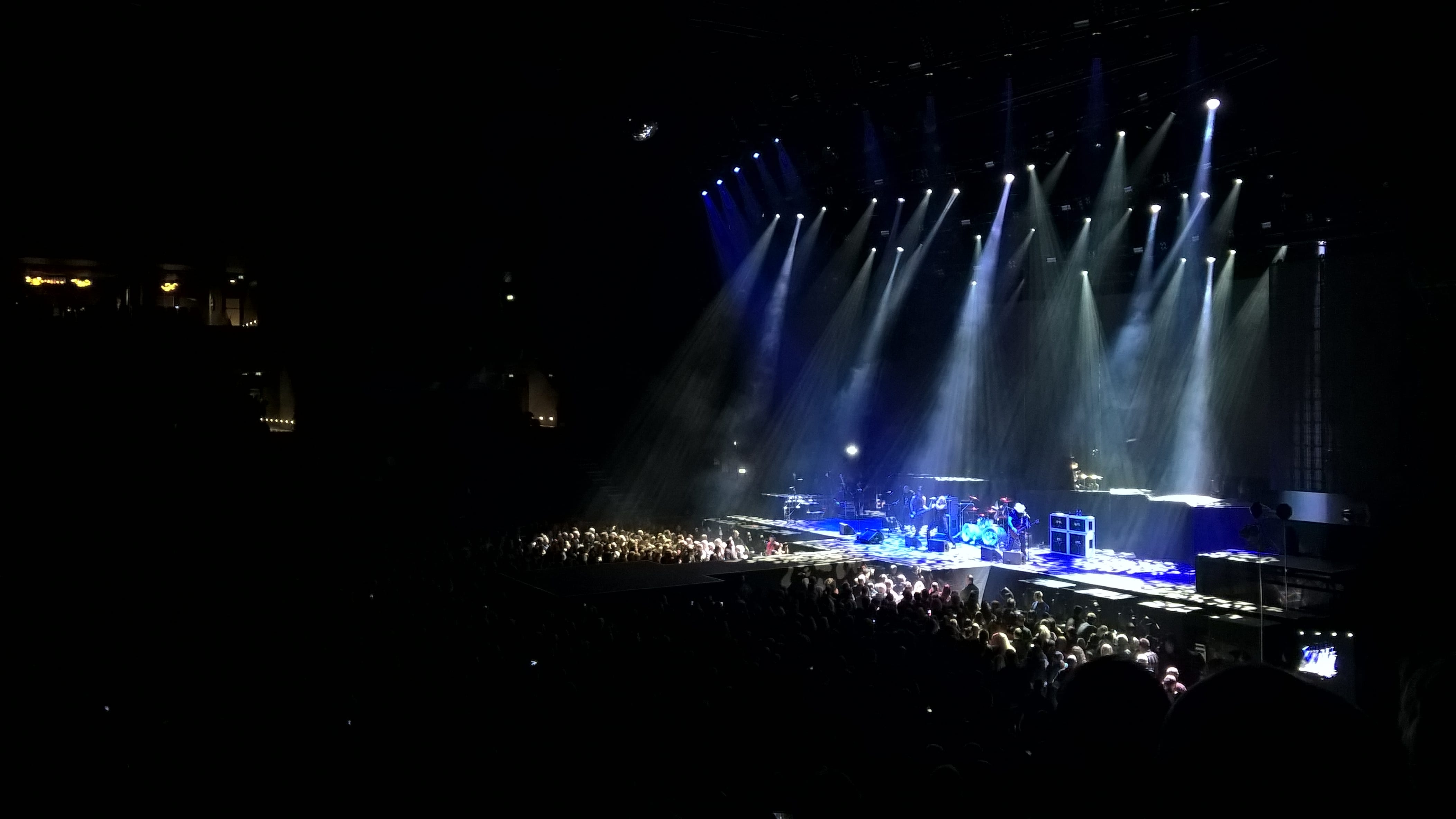 I got my pass at the ticket office, I was directed to the side entrance, and I got informed on the location of the press room and my seat, by the very polite and assisting organizers and security staff. As I entered the arena to find my seat, my last hypothesis was proven wrong: The place was packed with people. All the seats were full and the standing arena also. Apparently everyone was already inside!
My seat was on the side of the stage, about a third of the arena length. The visibility was fantastic, the sound perfect and Pretty Maids started precisely on time! They were the finest band to warm us up, even though they only played for 45 min. They are obviously a household name here and they were very comfortable with their audience (and the huge stage). Nevertheless, they rocked us like a hurricane (yes, I know it’s not their song), kept the tempo high, with the exception of “Please Don’t Leave me” and a hint of “Another Brick in the Wall”, and left us ready for the headliners with the Monty Python “Sit on my Face” on the speakers. 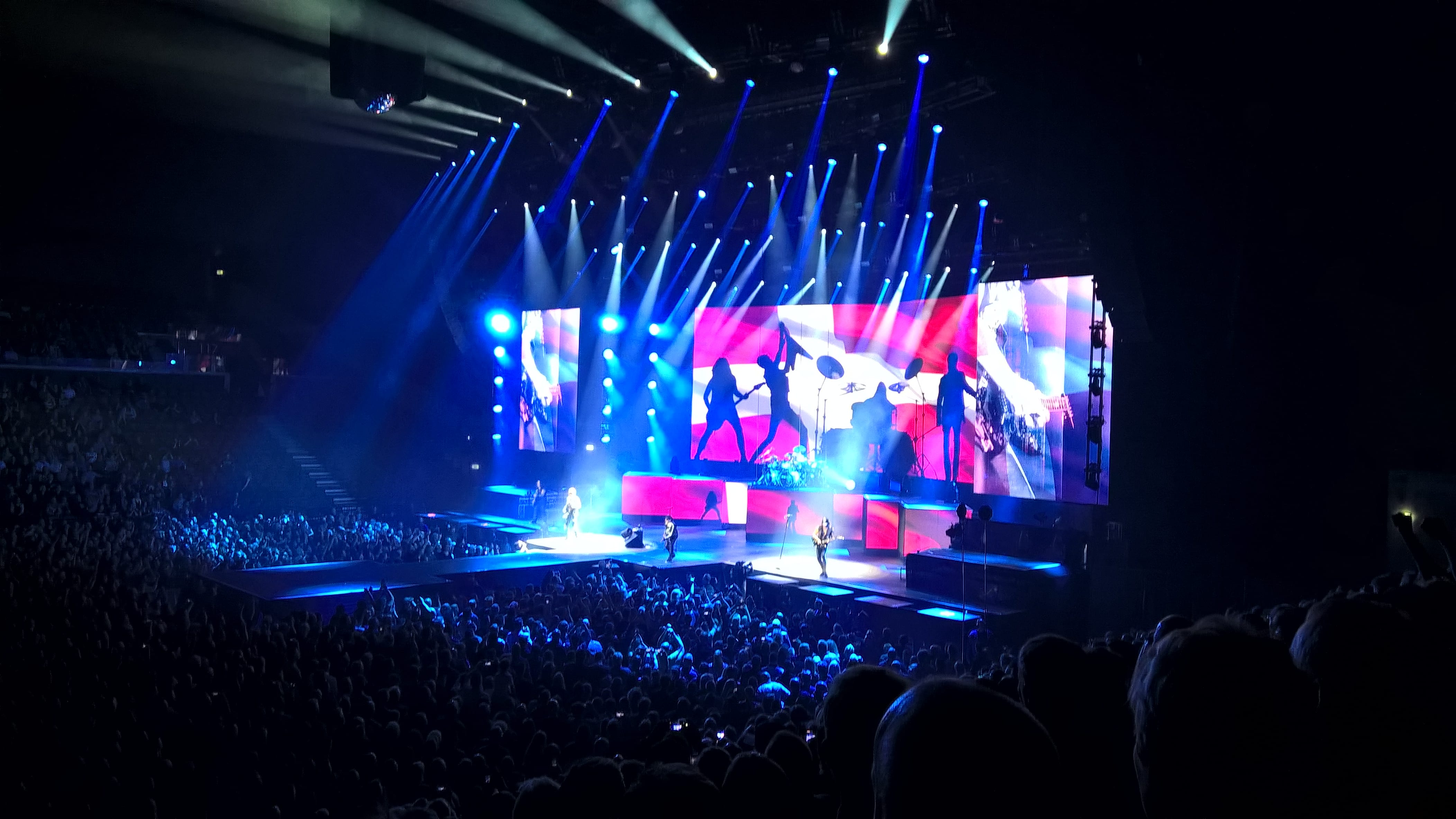 While the stage was being cleared up, a huge Scorpions curtain was raised to hide it and fall when they came out with a Bang! And there they were, a band I have seen quite a few times, interviewed in several occasions, still kicking ass as only they know how to do it. If you have seen them at least once, you can only admire what they do and how they keep doing it with the same passion, the same flair, and almost the same endurance for the last 50 years.
It’s difficult to find anything negative to say about these guys. But when I saw them at Sweden Rock last summer, I had found Klaus Meine tired and struggling to catch up with his continuously moving partners. I was really glad today to see that Meine was back in form, as the rest of the band! Of course, his voice was and is still exceptional. 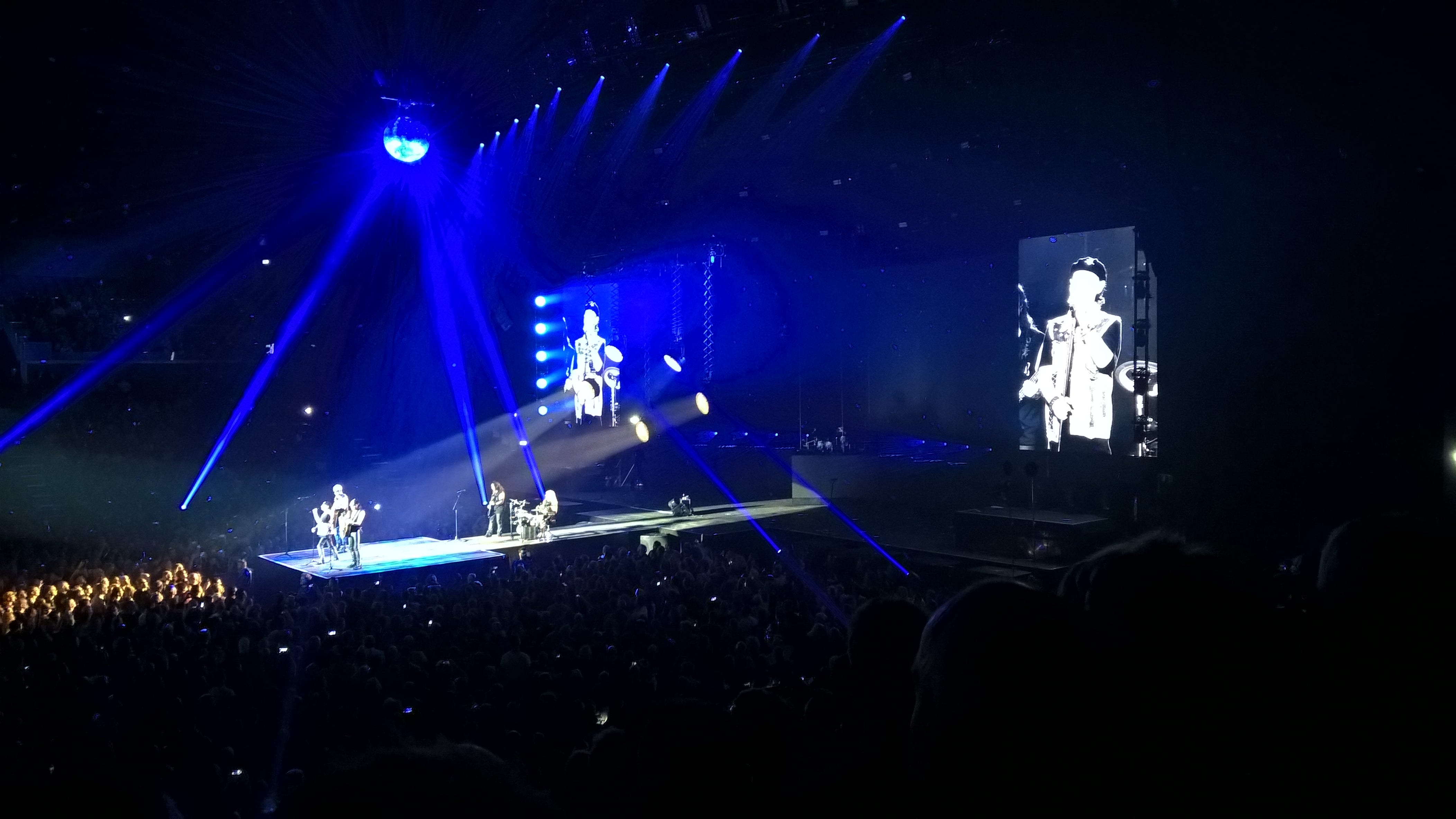 Mikkey Dee has been such a great addition to the band. He’s an unstoppable drumming machine. He has brought unlimited tireless energy and apparently lots of drum sticks that Meine likes throwing to the audience when he’s not singing. That also explains why Dee plays with the same sticks throughout the show. At the same time, Rudolf Schenker, Matthias Jabs, and Pawel Maciwoda, like proper wingers, run their usual kilometers up and down the stage.
The Crazy World tour intro to the show was the same with Sweden Rock (obviously), something like the very old Dolby Surround video with the helicopter. It took a couple songs and the Zoo to get the Danes dancing. Besides, how can you stay immobile with this song? For “Top of the Bill”, Meine remembered driving in Germany in the early 70s and Schenker saying that one day they might go to Scandinavia, and even reach Copenhagen. “Steamrock fever” led to the autobiographical and nostalgic “We Built This House”, and “Delicate Dance” by Matthias Jabs and the rhythm section. 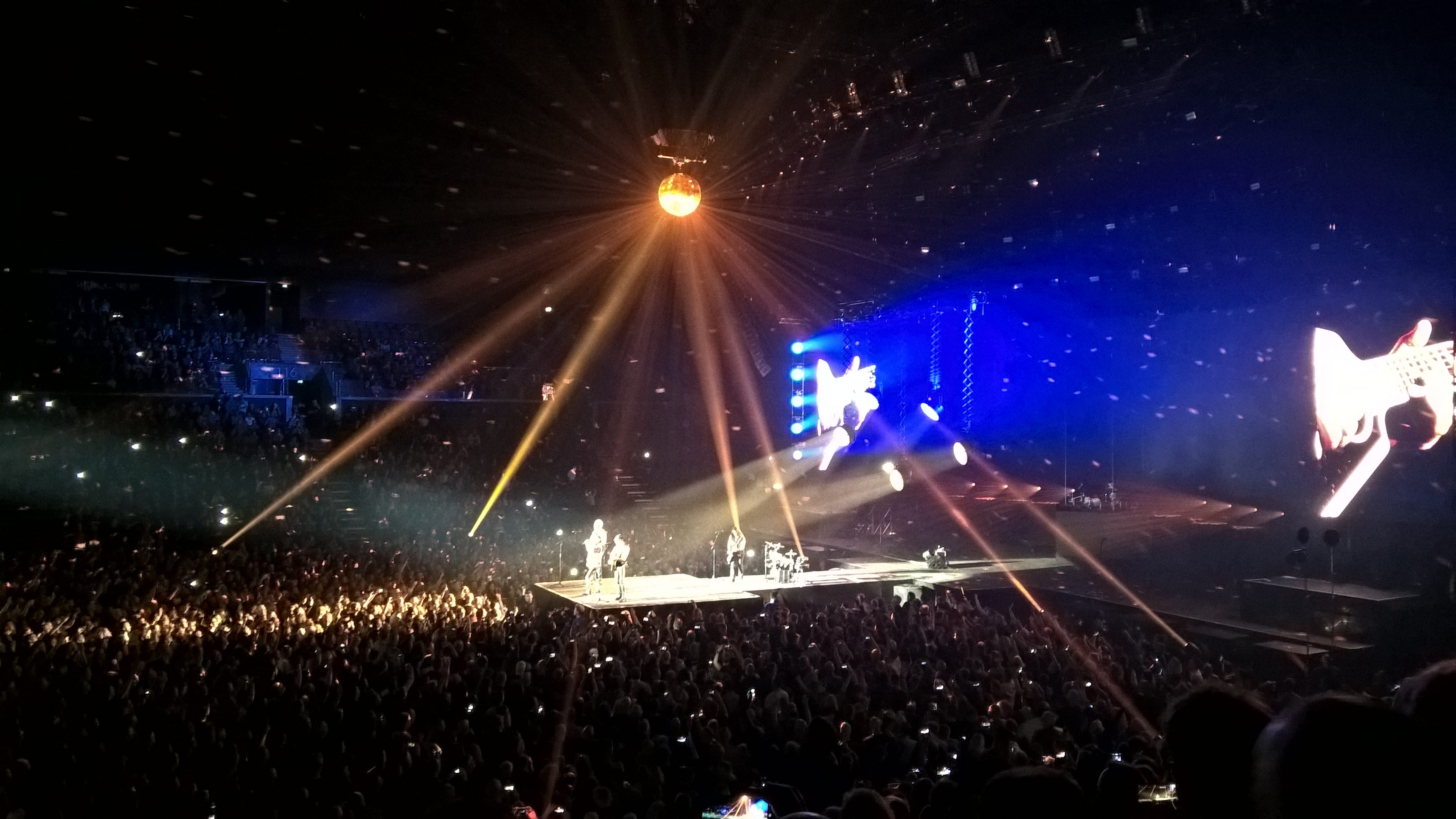 When the ballads started, the stadium responded appropriately. “Always somewhere”, “Eye of the Storm”, and “Send me an Angel” brought the whole band to the front for the acoustic session. “Wind of Change”, and “Rock’n’Roll Band” in the line of Blackout were followed by a Motorhead tribute. At last, we got the chance to understand the lyrics of “Overkill”. Mikkey Dee continued the tempo with an exhaustive solo that led him and his drum set a few meters off the ground. “Blackout” did not have an actual black out (or maybe I missed it?) and “Big City Lights” brought the show to its first end. The encore with “Still Loving You”, with a taste of “Holiday”, and “Rock You Like a Hurricane” ended a wonderful night. If these guys come by your town, don’t miss them. There will never let anyone unsatisfied*.
George Anasontzis
* Ok, I would really love to hear “Living for Tomorrow” one day…