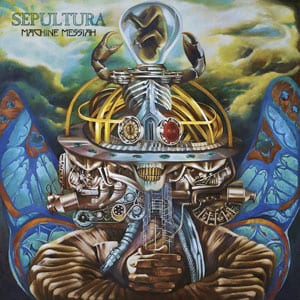 2017 started off with a great surprise. The last two Sepultura albums, ‘The Mediator Between Head and Hands Must Be the Heart’ (that’s a mouthful) and ‘Kairos’ were easily forgettable at best, but ‘Machine Messiah’ proves that the band is still alive. And, to mention the Cavalera brothers – I know, shocking – it’s the best thing either side has put out (Killer Be Killed aside) since 2008’s ‘Inflikted’, the great Cavalera Conspiracy debut that sadly wasn’t followed by material of similar quality.

‘Machine Messiah’ is the work of a band that looks to the future, with new ideas and a desire to experiment, apparent from the get-go in the title track. Andreas Kisser is in great shape, delivering many of his characteristic riffs but also embellishing his guitar playing with different sounding, Mastodon-ish passages. Derrick Green on the other hand may not exactly shine through, but his performance is above decent.

For the first time in a while, I look forward to new songs such as ‘Phantom Self’ or ‘Sworn Oath’ being added to the Sepultura live set.