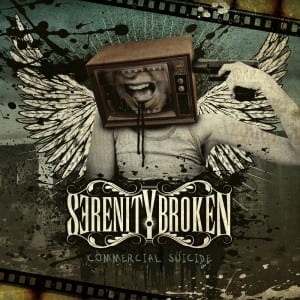 The debut album from this five piece band from Athens is a pleasant surprise that justifies all the nice things that I’d heard before it reached my ears.
The first noticeable thing is the exceptional production of the album, which was done in Finish Tico Tico Studio by Ahti Kortelainen. Serenity Broken walks on the thin line between hard rock and metal, a sound close to lots of big names from the American scene of the 90s and 00s. The tracks are melodic, catchy and straightforward without being restricted to the verse – chorus formula. The Guitars have some Mark Tremonti in them, but with a more edgy and groovy right hand in the rhythm parts. As a result you get great unexpected riffs like the one in ‘’Another Fading Memory’’ and the outro of ‘’Alone?’’. Another quality of ‘’Commercial Suicide’’ is undoubtedly the strong choruses, with vocal melodies reminiscent of singers like Sully Erna and Layne Staley. In total the combination and digestion of the various influences was done successfully by the group.
Lastly, the commercial suicide gets even more exciting thanks to the devastating drumming by George Kollias of Nile, in the song ‘’Def’’.