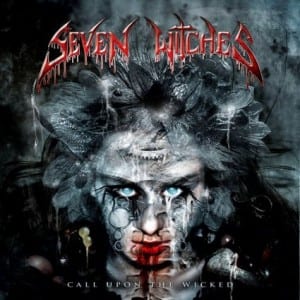 The news of James Rivera’s return to the Seven Witches camp was motivating enough so as to listen to the new effort by Jack Frost and Co. After a couple of mediocre –in my humble opinion- albums, the American outfit returns to the familiar paths of traditional heavy metal with songs that almost instantly refer to such albums as “Passage To The Other Side” and “Xiled To Infinity”. Traces of early Maiden and Priest’s influences can be naturally found scattered throughout “Call Upon The Wicked”, Rivera’s interpretation of the songs is flawless, Frost’s guitar work is brilliant while Mike LePond’s bass licks bring in mind Symphony X.
In “Call Upon The Wicked” we get the chance to listen to –among other stuff- one of the most complete and diverse Seven Witches compositions (“End of Days”), the anthemic “Ragnarock”, the mind-blowing “Fields of Fire” (for which the first video was shot), a cover version for Cream’s “White Room” and three bonus live tracks.
All in all, Seven Witches is back with a blast and let’s hope that they will continue on this direction…it suits them far better!
Highlight: I would have loved to listen to more than 8 original Witches songs on this one…