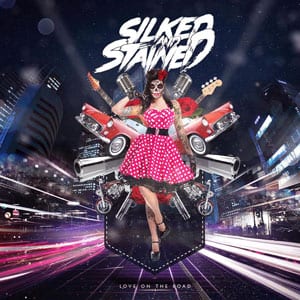 This is the debut album of the Greek melodic rockers Silked & Stained and its going viral already, since it’s not easy to find a band of the Greek scene that’s really into this kind of music and also release such a great album. The Athenians started the band in 2013 with their first single “Much Love” that you will find in the “Love On The Road” album. A song that stayed on the top 20 of Atlantis FM charts for at least two months and was also at the compilation of the English magazine Fireworks. I am listening to it for the 3rd time and I can say for sure that “Much Love” is my favorite song so far.

Next in line for my music taste is probably “Ηold My Hand” which is also the first professional video clip although I wouldn’t recommend it as a first choice for a promo song since I find “BombShell”  and  “Believe” more catchy. But, the truth is that most of the songs in this album are exceptional!!

After knowing and loving Wild Rose and also the newborn Rain Or Shine, I never thought I would find a band in Greece so keen to melodic rock. Silked & Stained fulfilled my expectations and although I am not yet in the position to compare them with other big European bands, I strongly believe that with hard work and confidence they can easily be the next Greek band (after Redrum and Wild Rose) to open for big melodic festivals in Europe such as Firefest, Z ROCK, HRH and more…

“Love On The Road” ends with “Born To Run”, which meets all first class quality requirements and the production of the album sounds flawless. As a result, I am sure there are listeners who will think that the album was mastered in a studio somewhere in Sweden.

I strongly recommend it to every melodic rock listener out there and I hope that they will continue with the same spirit!