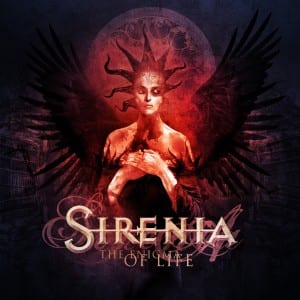 Ι’m often wondering about the attention we must pay, all of us presenting album releases, to the actual amount of work and craft of such releases. Work and detail in creating a musical product is something I personally always valued, considering professionalism as a remarkable virtue. Is such a thing enough though?
In this case, the new album by the Norwegians, is the response to all that and the response is negative. “The Enigma Of Life” gives us the impression it is totally crafted and detailed, concerning composing and producing, however it also gives us another impression, that of another reality. This reality dictates that Sirenia have softened up, that they are more polished. Some choruses might stick to mind, some exceptional choir parts, too, however guitars are limited to an annoying level as well as male brutal vocals, which were giving another color to their music. To make matters worse, Ailyn sounds rather flat in “The Enigma Of Life”, without any solutions for her performance. Naturally, the above were not made without a purpose, yet the issue here is what this purpose is all about. It’s a fact that they drift away from the metal audience and I fear they are going to face certain consequences. Whether they have aimed for it or not, they are part of Female Metal Voice, a genre that still has a long way to go. They are a part of it because music tags can not be avoided that easily. Sirenia seem to appear snobbish towards metal and that leads to a big portion of the work they’ve done going astray.