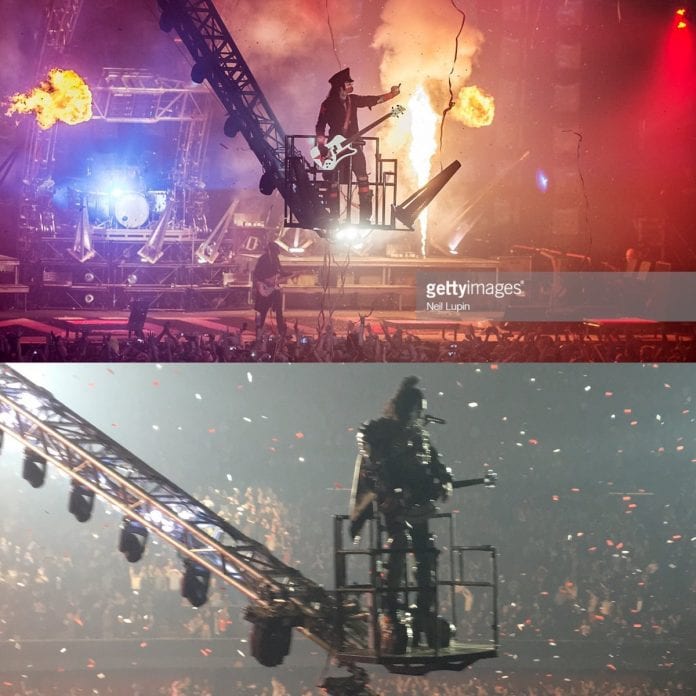 MÖTLEY CRÜE bassist Nikki Sixx has called out KISS for the band’s stage production on its current “End Of The Road” tour, saying it is “an exact reenactment” of the show that the CRÜE took out on its own farewell trek a few years ago.
Just hours before KISS was scheduled to take the stage Saturday night (February 16) at the Forum in Los Angeles, Sixx posted two Instagram photos of the CRÜE’s “The Final Tour” stage set in which he and singer Vince Neil are carried by two gigantic cranes over the entire arena floor. Sixx wrote in a caption, “If ya wanna see an exact reenactment of this just go to the #LosAngeles Forum tonight.”
Sixx also responded to a similar accusation made by CRÜE drummer Tommy Lee nine days earlier. On February 7, Lee tweeted a video of the “End Of The Road” kick-off concert in Vancouver, in which bassist Gene Simmons and guitarist Tommy Thayer are transported by two cranes. Lee wrote in a caption, “Dayum @KISSOnline this sure looks identical to @MotleyCrue’s final tour.” On Saturday, Nikki tweeted in apparent agreement: “Damn…”