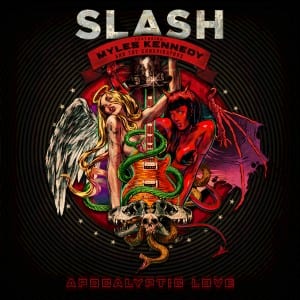 Slash’s “Apocalyptic Love” doubles the solo albums from the last guitar hero of this planet. Shows its teeth, goes a notch higher than his debut, and brings back in mind the majesty of Guns’n’Roses.
Just that there is a band in this album, and not a parade of flashy, as well as diverse elements, plays an important role. Maybe, the shine of some of the most famous stars like Ozzy, Lemmy, and Fergie is missing, but it’s no coincidence that Slash is equipped with the swiss Army knife, also known as Myled Kennedy. A talented singer-guitarist who thanks to his undoubted talent and abilities is well-sought after, especially after he appeared in Alter Bridge. Plus, the band that is playing on the album toured with Slash and wrote the songs. The writing credits are split among the members, and Kennedy came up with all the lyrics.
So, it’s quite natural for “Apocalyptic Love” to sound more focused, disciplined, full, and balanced than the debut. Another important thing about it is that all the compositions have a level that remains the same going upwards. So, that means that “You’re A Lie” that was actually he first sample of the album to go in public, has nothing to be jealous about comparing to “Anastasia”, or “No More Heroes” from “Bad Rain”. Of course Slash’s guitar performace is amazing with his characteristic Les Paul sound being the real star in every song, and melting faces with every autobiographic solo. He sounds even more free, and relieved since he seems that he found the perfect ground to do what he wants, how he wants it, and when he wants it.