There are live shows that you instinctively know, almost beforehand, that the final result is guaranteed as the band will give everything it has on stage, the energy through the songs will be supersonic and the crowd will have an amazing time which is really the sole purpose of a live experience. The thrash legends Sodom have proved all these years with their numerous concerts in Greece that they are more than capable of delivering the goods and their last show in Athens was no exception.

The relatively easy task of warming up the crowd handled two Greek outfits: Bio-cancer and Exarsis. I say “relatively easy” due to the twin fact that the loyal thrash fans support wholeheartedly the underground scene and those two bands have shown that they are excellent successors of those old school thrash bands of the 80s. I truly enjoyed Bio-cancer that based their set on their album “Ear Piercing Thrash” while the technical capability of the members was astonishing. The moment where almost all the members embarked on a “in your face” stage diving was brilliant! Exarsis –after the recent line-up changes- proved that they remain a really tight outfit by presenting a show that would be envied by more experienced bands of the genre. The live renditions of the songs (cued from the couple of studio albums of Exarsis) were more intimate, more brutal, more…in your face compared to the studio versions. The truth is that I expected a more diverse voice from the new singer but all in all I really enjoyed both sets from Exarsis and Bio-cancer.

A few minutes before the clock strikes 23:00, Sodom hit the stage into a wave of pandemonium created by the fans. Uncle Tom, longtime partner Bernemann and newcomer Makka started with “The Final Bullet” from the excellent last album of the band “Epitome Of Torture. The classic “Eye For An Eye” followed while the first notes of “Outbreak Of Evil” caused delirium below the stage! I was pleasantly surprised to listen to three songs of the criminally underrated “M-16” album: “Among The Weirdcong”, “I Am The War” and the title track. During “Burst Command Til War”, “Agent Orange”, “Ausgebombt”, “Christ Passion”, “Stigmatized”, “Sodomy & Lust”, “Fuck The Police” (the crowd wanted it, the band played it) and “Iron Fist” (dedicated to the God Of Rock N’ Roll, Lemmy, as Angelripper said) the fans committed themselves to an unstoppable and constant stage diving and Sodom seemed quite surprised and couldn’t really believe it! Angelripper characterized the Greek audience the best heavy metal fans in the world, didn’t stop thanking us and shared beers to to the fans on the front. He even gave a sheet of paper to a fan with the lyrics of “Into The Skies Of War” so as to hold it and Angelripper to read them! What a sight!

In a word: PANIC! We are already awaiting the imminent return of Sodom. Their live shows are fun, enjoyable and purely…THRASH!

Special thanks to Yiannis Negris and i-jukebox.gr for the photos 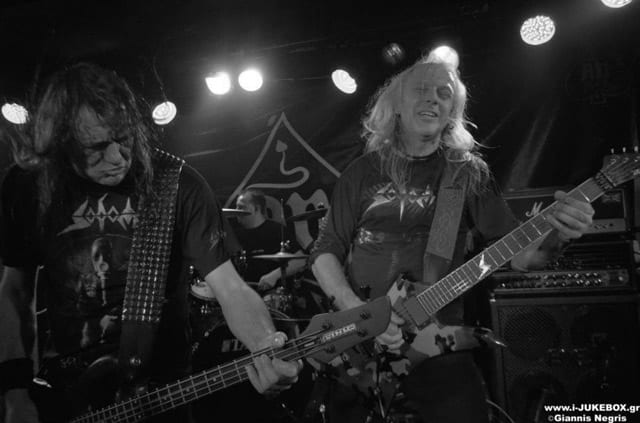