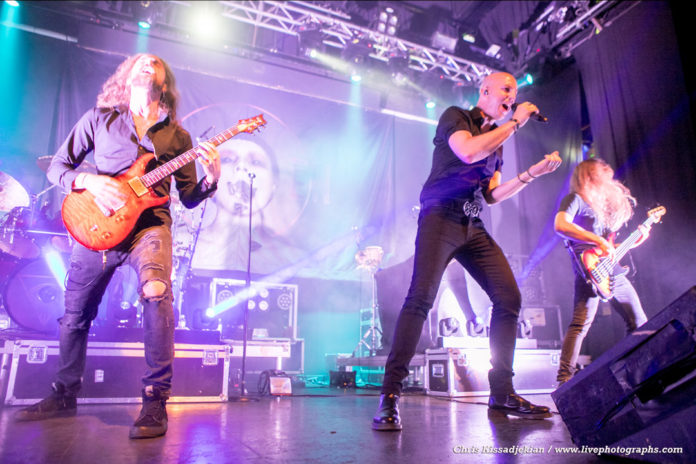 The calendar showed September 4th 2019 when Soen played for the first time in Greece and specifically in Thessaloniki. Athens followed a day later and the impressions from these shows were the best. Luckily for us, the Swedish band is back for two more concerts and this is a first-class opportunity to go through all their records (not that we were looking for a reason do that).

It took a long time for the debut album to be released, if we consider that the band was actually created in 2004. But it had to be 2010 for the official announcement. Soen’s first line-up had two very big names in the rhythm section. Martin Lopez on drums who left Opeth in 2006 and legend Steve DiGiorgio (Act Of Denial, Testament, ex-Death, ex-Sadus) on bass. The guitar parts were handled by Joakim Platbarzdis. The singer was Joel Ekelöf, a choice that seemed strange to those who had listened to his pop/rock band Willowtree, but he certainly suited Soen perfectly and since then he has left his own unique mark in every release. “Cognitive” was a very good first attempt, although it was criticized for its obvious influences from Tool. Of course, on closer inspection it is clear that Soen are not copying them. There is a lot of common ground in riffs, rhythms, bass lines and vocals but songs like “Last Light”, “Canvas”, “Purpose” and “Slithering” among others showed that the Swedes intended to go through their influences to do something of their own. In general, it is a shame to listen to “Cognitive” with prejudice. You will miss the wonderful music that unfolds on the album.

DiGiorgio leaves and is replaced by Stefan Stenberg and Christian Andolf. Here, Soen take a different approach. “Tellurian” is more experimental, more atmospheric, with strange structures and some long song durations. Also, guitars follow two different directions. Sometimes with riffs (which in times are quite heavy) and sometimes with soft melodies, focusing on the atmosphere. The beautiful “The Words” and “Pluton” are examples of this. There is also a change in the style of the vocals, with Ekelöf sounding more melodic and unfolding his voice’s true range and potential. Essentially, these changes show the direction that Soen would follow in their next records as well as their desire to develop as a band and not to remain stagnant.

New album, new changes in line-up and music. Joakim Platbarzdis leaves and is replaced by Marcus Jidell (Avatarium, ex-Evergrey, ex-Royal Hunt). The bass is left exclusively in the hands of Stefan Stenberg and the multi-organist Lars Åhlund enters the band on keyboards, backing vocals, guitars and percussion. Here, Soen completely move away from any obvious Tool influences (which were a lot fewer in “Tellurian”) and begin to establish their sound. A sound that is one step ahead of the previous album but with songs that focus not only on the atmosphere but also on being more straight-forward. The complexity and the experimentation give way to a clearer direction, without of course meaning that the album lacks technique since the quality of the musicians is something no-one can deny. “Lykaia” was essentially what changed the career for the Swedes, making their name bigger to a larger audience after entering the charts of four countries for the first time (Austria, Germany, Switzerland, USA). The production was done by Jidell using analog equipment but the mixing and mastering did not satisfy the band in the end, so the following year it was re-released with the title “Lykaia Revisited” having undergone a remaster, with a new cover art and five bonus songs (two studios and three live).

Masterpiece. I could only write this and nothing more. “Lotus” on my personal list was one of the best albums I listened during that year. With another change in the line-up, as Marcus Jidell left and his place was taken by Canadian Cody Ford. Here, Soen take the sound of “Lykaia” one step further. The fact that they are considered a prog band, does not limit them in the strict sense of the word. The songs are once again more straight-forward, with heavier guitars and amazing vocal melodies by Ekelöf who has a breathtaking performance. The band is perfecting their own distinctive sound and anyone who still refers to Tool is simply deaf and does not even bother to sit down and listen to what they have composed. “Lotus” brought them even greater recognition (and for the first time for a concert in our country), they re-entered the charts of the countries that had “conquered” with Lykaia in much better positions but also in two new ones (Belgium, The Netherlands). Also, in 2021 it was re-released with three bonus studio songs, which are not inferior to any of those of the original version.

I think the title of the album very accurately describes the band in its current state. Imperial. With another change in the line-up (it has become a pattern now), as Stefan Stenberg left and his place in the bass was taken by the Ukrainian Oleksii “Zlatoyar” Kobel, continuing the… tradition of the internationalization of Soen. As for the music, the truth is that here we see for the first time that there are not big changes in their sound as “Imperial” is the natural continuation of “Lotus”. Do we mind? Not at all, since on the one hand it seems that they now know very well what they want to do and on the other hand when they write such great songs, they leave you with no choice but to just sit down and enjoy them. Compositions full of emotion, amazing vocals, impeccable technical brilliance. Without sophisticated complexity or experimentation, just great music that does not give a damn about any label. One of the best albums of 2021 in my humble opinion. The tour for its promotion encountered many obstacles due to Covid, but at last it continues normally and passes through our country. Of course we must be there.

Okay, we’re not talking about a real release but a wish from their fans which is likely to come true. It is essentially the first and only live streaming of the band that took place on February 18, 2022. And of course they could not do something ordinary, something special had to be done as Joel Ekelöf told us in his interview for “Imperial” in our webzine. Here the band plays acoustically, changing the orchestrations of their songs. With them on stage are a string quartet as well as a choir. As they themselves stated, they left out the technical characteristics of their tracks and focused on the raw feeling they bring out. Unfortunately, complete videos for those who failed to see the specific event do not exist (or I have not found them yet), but from the teaser that was released, it seemed how interesting everything they set up was. I hope that we will see it in a proper release.