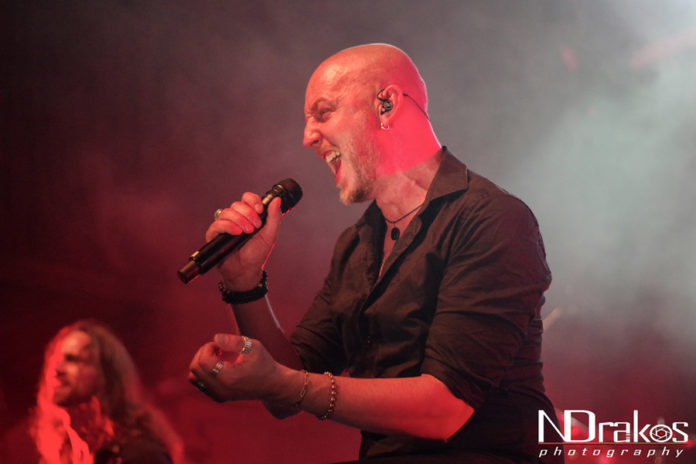 May is gone too. A month with many club concerts by Greek and foreign bands. A month that made a lot of fans of this music go to a concert after two years. Before entering the summer season with the countless concerts that you have to take a loan if you want to see them all, a walk to Gagarin was necessary for the second visit of the great Soen on Greek soil.

The concert started with Michael Krumins. The Norwegian musician had played for some years in the mighty Green Carnation but also in Sirenia. Now, he has moved to our country (and specifically to Ikaria if I am not mistaken) and his show included an acoustic set with his songs, With a huge smile, he practiced also the few Greek he knows so far between his tracks. Nice music but there was a big problem. The audience showed once again how uncivilized we can become, since the noise from the discussions at points overshadowed the music of Michael. You could see people not even looking at the stage. Yes, maybe what Michael presented was not ideal for such a place and would fit perfectly in a small venue or a bar but even a little respect for the person who plays guys. Really unacceptable. Of course, this didn’t discourage him and he kept smiling until the end. In the end, at least he won the warm applause of the people and a rhythmic chant of his name. I would like to see him again, but under different circumstances.

The delay until Soen took the stage seemed like a century. But when the first sirens sounded, everything stopped and the multicultural quintet came on stage with “Monarch”. What followed is not easily described in words. The band’s performance was impeccable. They may not seem to play complex music anymore, but the technical brilliance of all the members is amazing and the way they played made you stare at them. Canadian Cody Ford on guitar, Swedish Lars Åhlund on guitar/keyboards, Ukrainian Oleksii “Zlatoyar” Kobel on bass and of course the Uruguayan/Swedish leader Martin Lopez on drums. As for the vocals? Swedish Joel Ekelöf was shocking again. He does not have the typical presence of a metal singer on stage, but the way he handled his voice made you admire him. This melodic, atmospheric and special voice. He did what he wanted and left us with open mouth when he was singing. Some great examples are “Lunacy”, “Martyrs” and “Savia”.

They didn’t have a great communication with the audience, they never do, after all, but it did not matter from the moment they reached to such a performance. The changes in their music were frequent, as the heaviest parts were even heavier due to the fact that Lars Åhlund had a much larger share as a second guitarist than as a keyboardist while the calmer ones created an amazing atmosphere. At least here the audience limited their discussions and so the less electric moments had the necessary quietness to be heard properly. Although I had a group of apes next to me who didn’t stop making noise without any reason, while the people next to them beg them to stop in order to enjoy the concert. But no luck.

The setlist was based as was normal on their last two excellent albums (with six songs each), with two more from “Lykaia” and another on “Cognitive”. A notable moment was when the presentation of the musicians took place shortly before the closing, first with Zlatoyar receiving prolonged applause for his Ukrainian origin and then with Ekelöf receiving a chant in Greek that made him wonder, with the actual translation being “the bold guy is crazy”. The chant vibrated the space and Ekelöf, who obviously did not understand a word, looked at Lopez who made a characteristic gesture showing him that they were talking about his head. Something that made him say ironically that it is nice to say a slogan for his bald head and was followed by another chant with his name this time. I do not know if this annoyed him or not, but in the remaining four songs he was just as enjoyable. The closing with the epic “Lotus” gave the finale to a magical night.

In conclusion, Soen’s second show in Athens was flawless and perhaps better than the previous one. Very interesting opening act by Michael Krumins (despite the contempt of the audience) and impeccable performance by Soen, both in terms of technique and of course in terms of vocals since Joel Ekelöf is a class by himself. We are very lucky that we have seen this amazing band twice during the best years of their career. Is the next one too late?

P.S.: A proper shout-out to the Polish roadie of the band who did not stop headbanging and singing every lyric from the edge of the stage.