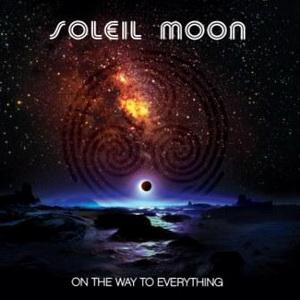 Dude, this is one freakin’ amazing album! Maaan, this is a totally awesomely awesome awesomeness! Andy Tillison as well as certain AOR souls I’m aware of, are actually green with envy as we speak? They are really-really green? Good, I’m glad!
Larry King (wot, his parents lost a bet with you-know-who?) from ChiTown is a well-known producer, composer, singer of course and a bunch of other things. He’s got tons of ideas for songs and albums and at some point he meets with John Blasucci, an amazing keyboard player and song arranger. Soleil Moon are being born and debut album, “Worlds Apart”, is released in 2000, causing a success wave in the musical beach. Eleven years later, the two gents are back with “On The Way To Everything” and Frontiers is bringing the album to Europe this year.
So, what do you guys and gals have a sweet tooth for? A ballad? Do you wanna cry for hours, talking on the phone with him/her and more? “Goodnight Irene” and it’s a cry nebula all over the room and the amazing roughness and King’s voice in general will put you thru a wall! You want more? How about something voyage-ish, with a tad of “Bye! See you soon… Definitely”! Got it, it’s time to “Move On”. This one also features a crazy drum-thing towards the end. Is Vinnie Colaiuta playing the drums on this one, too? Cool! So, what more do you want? Crazy youngster American thing, so you can shake it a bit, under the summer weather produced by the club air-condition? Fine with me, let’s go with “Down”!
It’s not just the magical voice or the fine production. It’s not just the mood. The songs are superb, the climate is ideal, the motif is… It’s a bliss!  The atmosphere is dreamy, just dreamy! It’s the ultimate album you buy, listen to, get so excited about it that you wanna call everyone you know and tell them how GREat it is. “Dude, do you know Soleil Moon”? Yep, more and more peeps should know about this album.
There are three bonus tracks on the record. Including the mighty “I’d Die For You”, which was also covered by Place Vendome.