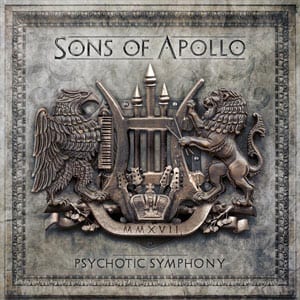 Mike Portnoy, Billy Sheehan, Derek Shirenian, Bumblefoot and Jeff Scott Soto? It’s hard to imagine these guys not delivering something worth your time, especially since their chemistry has been proven in the past, in projects such as The Winery Dogs (Portnoy/Sheehan), and mid 90s Dream Theater (Portnoy/Shirenian). After his departure from Petrucci & Co., Portnoy has somewhat become the Dave Grohl of metal, being in a dozen different bands simultaneously, this is however the first time he’s tried something that close to classic prog metal territory.

In ‘Psychotic Symphony’ Sons of Apollo have created a traditional, therefore predictable debut; but, the quality of the musicians is so high that it automatically leaves a good impression. It brought to mind that Dream Theater cover of ‘Stargazer’: It’s a mistake to change it, it’s impossible to make it better, so stick to playing it faithfully and well. Case in point, it’s the atmosphere of the Rainbow epic that ‘God of the Sun’ is trying to latch on to; it’s also the best song on the record.