The NWOBHM veterans Spartan Warrior are checking their passports and preparing their luggage for their upcoming visit to Greece. The band will be sharing the same stage with Holocaust and Medieval Steel (among other acts) in the first ever Rock You To Hell Festival that will take place in Athens, Greece in November. We manage to “steal” some of Dave Wilkinson’s (Spartan Warrior’s lead vocalist) precious time and find out the latest info on the band, their upcoming Greek gig and whether NWOBHM is…dead or not! 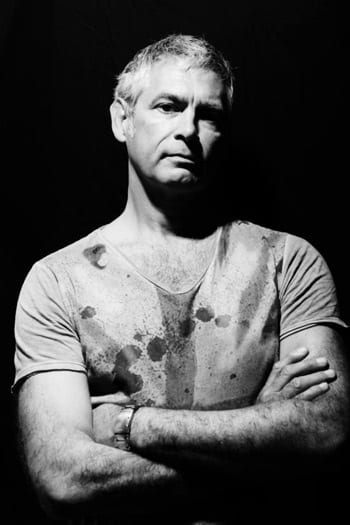 Rockpages.gr: Dave, how are things in the Spartan Warrior camp nowadays?

Dave Wilkinson: Things are going really well with the band…thank you. The current line up is working well together. Although, Neil and I are the only remaining original members of the band; James Charlton (drums) and Dan Rochester (Guitar) have been part of Spartan Warrior for over two years whilst Tim Morton (bass) has been with us for 18 months. The live shows have been very well received and press reviews have been very good. The new material is coming along nicely and two or three new songs have found their way into the live set and are becoming crowd favorites just as much as the older material. It’s just such a pleasure to be back and playing in Spartan Warrior with these guys !

Rockpages.gr: It’s been almost three years since you released your last record. Are you working towards any new material and by the way how do you feel about “Behind Closed Eyes” now? Are you happy with its final result?

Dave Wilkinson: Yes, we are working on material for a fourth album. We have six songs fully written and we have recorded three of them by way of pre productions just so we could see what we had and how we were sounding. We are all very excited about the new material and as I was saying before three of the new songs have featured in the live set at some shows and they have all been very well received. I think that “Behind Closed Eyes” has some very good songs on it. Some of them such as “Never Take Me Alive” and “Tear Out Your Heart” were written back in 1983/1984 but didn’t make it onto the records then. Others such as “Last Man Standing”, “Behind Closed Eyes”, “Loud n Proud” and “As Good As It Gets” were written specifically for the album although the writing process may have begun in some instances in the 1990s as ideas, riffs or melodies in some form or other.  Neil was responsible for engineering and producing “Behind Closed Eyes” and as a guitar player and songwriter too he really had his work cut out for him but I think he made a pretty good job of it considering it was his first time and he was learning as he recorded it. None of us were happy with the way the second album was produced back in 1984 and so the whole purpose of doing Behind Closed Eyes was to prove to ourselves and to everyone else that we were capable of a much stronger album if we were allowed to get on with it ourselves and without anyone else trying to pull the strings. I’m very proud of what we achieved with “Behind Closed Eyes”….could we do better though ? Yes, and we will!

Rockpages.gr: How awkward was it in 1980 to form a band in England and call it Spartan Warrior? Who had the idea behind the name of the band?

Dave Wilkinson: Our original drummer, Gordon Webster, came up with the band’s name. We were called Deceiver at the time and were just moving into writing some of the songs that went onto the “Steel n Chains” Album. Gordon felt that the band was moving into a new phase and needed a strong identity. He had read a little Greek history and a little of the Spartan culture. At a rehearsal he asked what we thought of changing the band’s name to Spartan Warrior and we all agreed. I just hope that you guys don’t mind us using a name from your history and heritage of which you can all be so very very proud !

Rockpages.gr: Spartan Warrior evolved really out of a previous band called Deceiver. Personally, I don’t know if you had recorded anything with that outfit. Tell us a few things about Deceiver because there is no much information about it.

Dave Wilkinson: Deceiver never recorded as a band. Deceiver featured original drummer Gordon Webster and bass player Tom Spencer alongside two guitarists who I joined after their original singer left. The band played covers of other peoples songs in bars and clubs…songs by Hendrix, Wishbone Ash, Free and the like…quite blues orientated traditional British rock. After I joined we started playing Saxon, Judas Priest and Thin Lizzy stuff…I sort of brought it up to date…brought my own influence. Even when I joined the band were writing and playing its own material but again it was very traditional in the Free and Black Sabbath mould and none of those songs survived when the band became Spartan Warrior. We ended up replacing the two guitarists with Neil Wilkinson and John Stormont who went on to play with the Jess Cox Band (Tygers of Pan Tang) and Battleaxe. That’s when we started writing songs like Easy Prey, Steel n Chains and the like and that’s when Deceiver became Spartan Warrior.

Rockpages.gr: A much sought after compilation is “Pure Overkill” on which Spartan Warrior is represented by two tracks: “Easy Prey” and “Steel n’ Chains”. How did you arrange this deal and how important it was on the band’s evolution?

Dave Wilkinson: Neil was seeing a girl who had heard that a local recording label were looking for bands for a compilation album. The label was Guardian Records and the guy concerned was Terry Gavaghan. We recorded a rehearsal and took it to Terry. He liked us  and invited us to record “Easy Prey” and “Steel n Chains” for Pure Overkill. We paid our own recording costs and cut the two tracks I think over a single weekend or maybe two weekends and they ended up on the Pure Overkill Album. “Easy Prey” is on there but I think someone made a mistake as it is featured under the title “Comes As No Surprise”. Being on Pure Overkill was pivotal to what happened next for the band as we ended up staying with Terry and Guardian and we recorded the Steel n Chains album. Again we paid our own recording costs and recorded two songs per weekend until the album was done and Guardian put it out…that again was pivotal because Roadrunner signed us in 1984 and within a few weeks of Steel n Chains release Roadrunner had us back in Guardian Studios recording the second album with Terry. 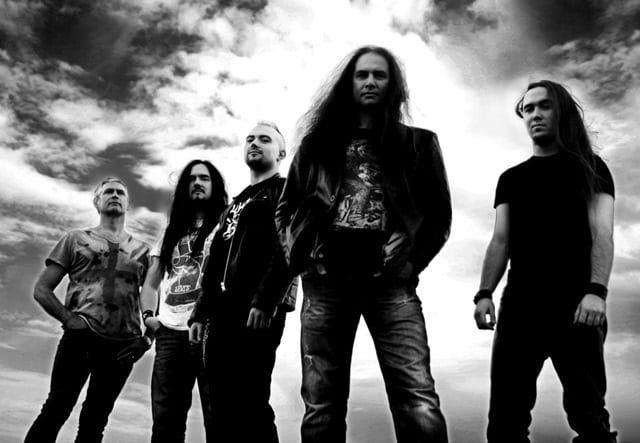 Rockpages.gr: Spartan Warrior released two albums and then broke up. What was the reason behind that decision of yours?

Dave Wilkinson: The split was my fault entirely at least to the extent that it was me who left the band. I had not been married long when we signed to Roadrunner and not long after that Terry approached us and said that it was time for us to give up our day jobs and tour. I was the only one in the band who had a day job and financial commitments to my wife and home. I just lost my confidence that I would be able  to make a living with the band or meet my obligations. No one was giving me any guarantees of anything and it was just too much of a risk. What you have to understand though is that my feelings were set against a lot of tension that had grown between the band and Terry during the recording of the second album. We all felt that we hadn’t been sufficiently in control of the recording of the second album and none of us were happy when the second album was released.

We didn’t like the production, the song arrangements had been tampered with and some songs had been made into extended versions by splicing the tape together without our agreement and my vocals were really poor as I had to record all of the vocals over two nights as Terry had spent such a lot of time on the drums and bass tracks that we were running out of time and money. I gather that after I left the guys soldiered on but I am told that whoever replaced me wasn’t liked by Roadrunner and so they dropped the band altogether. I know that Neil, Tom and Gordon continued for a long time after Paul Swaddle (guitar) and I had left and I have heard some of the material that they recorded with another singer and it is absolutely superb although by that point they had taken a  different direction musically…a bit like Def Leppard or Heavy Pettin.

Rockpages.gr: You were part of a very important genre in heavy metal music. Are you satisfied with what you have accomplished with Spartan Warrior?

Dave Wilkinson: Not yet. I think we still have a lot we can do. The live shows have been very very exciting. Everywhere we have played we have been absolutely blown away by the reception that we get…it just means the absolute world to me. I love being onstage with the guys…they really are just the best musicians that I’ve ever played with and I’m so privileged to be doing this.

I’m hugely proud of “Steel n Chains”, I’m proud that the live representations of the songs from the second album are played now as they should have been recorded and I’m very very proud of “Behind Closed Eyes”. I’m proud of Spartan Warrior and what we have done…but it isn’t over yet…not by a fucking long way !

Rockpages.gr: In the last few years, there seem to be a resurrection of the NWOBHM sound with the uprising of many bands that play traditional heavy metal. What’s your comment on this new movement and do you believe that this genre is still alive?

Dave Wilkinson: Yes, I do believe it is still alive. That’s why I’ll see you in Athens in November and that’s why this weekend we’re playing at Ages of Metal in Belgium and that’s why we’ll be back at Brofest in Newcastle in March 2014. NWOBHM has something very honest and true about it…the people who listen to the music, buy the CDs and support the shows are honest and down to earth people too…and we stick together…that’s what makes us strong and that’s why 30 years down the line NWOBHM is alive and well.

Rockpages.gr: What should the Greek fans expect from your show in November and what’s your message to them?

Dave Wilkinson: Expect 100 per cent commitment, expect to be entertained and expect us to appreciate your support…Can’t wait to see you…Spartan Warrior are fucking coming home !! 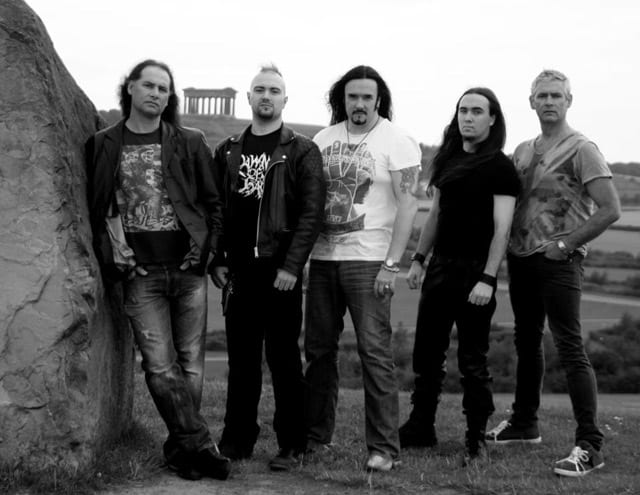