After the release of Spit Like This latest album, the band’s frontman, Lord Zion, talks to Yiannis Dolas about the unbearable “Normality”, his dreams and ambitions, and which rockstar he’d like to invite to his house for dinner. Also, don’t forget to check out the band’s new video on the bottom of the page!

Rockpages.gr: “Normalityville Horror” is a great title for an album. What’s behind that? What is not normal in Spit Like This camp? 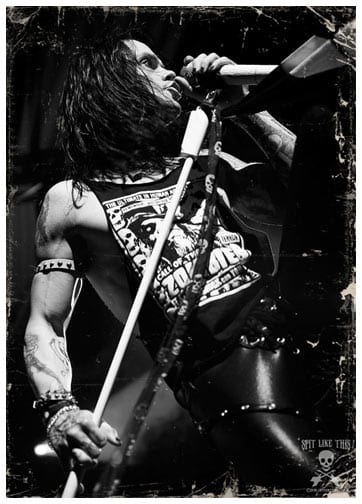 Lord Zion: I have always been a person that has lived their lives a certain way, following my own set of morals and rules.  One day, someone said to me “What’s wrong with being normal?” and that really stuck in my head.  To be honest, I was pretty dumbstruck as I am certain that most people, given the opportunity, would change the more normal aspect of their lives, if it didn’t mean giving up their security.  I think, as human beings, we all want to break free and run wild.  That is what I do.

Deliberately, I constructed a lifestyle that did not fit in to normal society.  I made a decision early on that I would only ever work for myself and also came to the conclusion that money – although it is very nice – would never be the thing that I aimed for.  If it was a by-product of what I did, fair enough, but it wouldn’t be my motivator.

We only have one life and it is very short.  The idea of wasting it doing things every day that you hate is abhorrent to me.  That would be my Normalityville Horror.

Rockpages.gr: This year marks the 10th anniversary for the band. How do you feel about it, what were your best and worst moments in those ten years, and what are you looking forward to in the next ten years?

Lord Zion: You know, I don’t really count this year as being the 10th anniversary.  For me, this band didn’t become serious until our first distributed release in 2005.  Before then, we were just trying to discover what we could do.  It didn’t get REALLY serious until 2008/2009 when we recorded and released our first album.  And it didn’t become REALLY FUCKING COOL until 2010 when we got Rob Riot in on guitar.  He brought with him the guitar style and sound we needed to match the rhythm section we had and the songs that we had.

For me, the best moment so far has been the release of “Normalityville Horror”.  The album was a labor of love and it is the first recording that we have made that truly represents SPiT LiKE THiS.  The fact that it took so long between recording and releasing it just made it seem even more special when it did happen.  And now we are getting positive feedback that is just the icing on the cake. 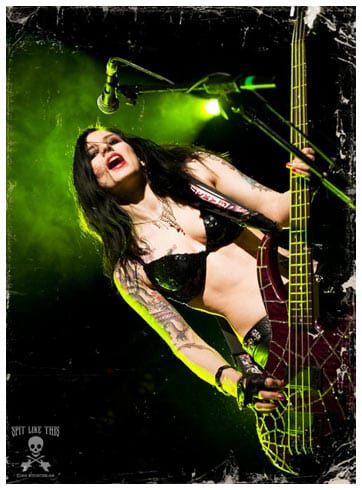 I don’t like to dwell on worst moments.  Sometimes things suck, you deal with them, you move on.  You need to have bad times to make the good times worthwhile.  If life was brilliant 24/7, it wouldn’t have any contrast and would get boring pretty quickly.

I want to spend the next 10 years playing shows around the world, visiting new countries, meeting new fans, recording new music and creating more great videos.  I really enjoy the visual aspect of what we do so videos are great fun.  I also want to extend the SLT Universe beyond it’s current boundaries.  I see no end to where we can go.

Rockpages.gr: Spit Like This is a band that combines several different kind of influences that come out as the band’s unique sound. How did you manage to filter everything you liked and had an impact on you to come up with your own sound?

Lord Zion: There is no real answer to that.  It’s not like a recipe where you take X amount of that and add Y amount of something else.  Stuff just gets written and something to do with the four of us playing it makes it sound like SLT.  However, I do believe the core sound of SLT is rhythmic and then my voice on top of that, playing around with itself.  We never set out to make a unique sound, but my voice is quite different to most voices in rock/metal – it isn’t high and screechy and it isn’t low and rough – so that makes us stand out.  The first rule of writing a SPiT LiKE THiS song is that there are no rules.  Music should never be an equation; it should always be an expression.

Rockpages.gr: The name of the band came from spitting, which is a rather extreme reaction in a gig, at least for today’s standards. What other extreme behaviors have you noticed during a Spit Like This gig?

Lord Zion: I’m quite glad to say that no-one has spat on us (yet) although, if they did, they would have the fury of a thousand demons unleashed upon them!  We played a gig once where some twat through some coins on stage – really dangerous as you don’t see them coming.  Another time, some pisshead was trying to grab my mic stand – Vikki clobbered him with her bass though.  Generally, people come to our shows to have a good time and, if they aren’t, they can fuck off out of there!

Rockpages.gr: When you have a song ready who is the first person you are going to play it to, in order to get his, or her opinion about it?

Lord Zion: I guess I would play it to Vikki first.  Songs are tricky beasts; when you write one, because you are expressing and a piece of your soul you feel very exposed.  This is why a bad review can hurt (if it isn’t constructive).  Once you release it into the wild to fend for itself, you sometimes have to put up with a lot of shit but, when people relate to it and love it, it is the best feeling in the world. 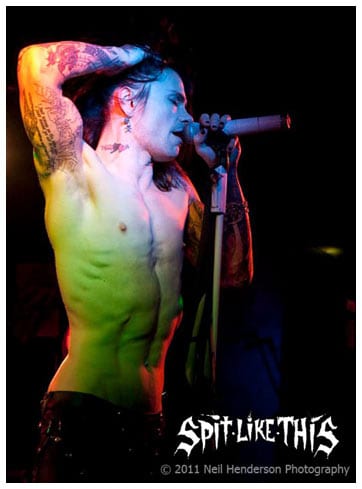 Rockpages.gr: Do you pay attention to what the press writes about you on reviews? Which feedback do you find useful?

Lord Zion: Yes and no.  I like reading good reviews (who doesn’t?!) but, with that, come bad reviews.  This kind of emphasizes how pointless reviews are, because they are always simply opinions and never statements of fact.  It has always been my argument that you cannot review art, you cannot grade art; you can only ever COMMENT on art.  Alas, we live in a world where people like to review and grade so it is a torment we have to endure.  A negative review, especially if it is personal, can stick with you for a while.  Something someone says might really dig in and take hold, eating away at you.  It’s pretty tough sometimes but it is part of it.  I have to remind myself that my favourite things in the world are hated by many so, if someone hates me or what I do, c’est la vie.  I never respond to reviews though and I would never change me, what I do, how I do it or what SLT does to suit them.  People that do that are forever chasing the unobtainable.  Just be yourself: some people will like it, some people will hate it.  If you are TRUE to yourself though, everyone has to respect it.

Rockpages.gr: What would you say that it’s the band’s strongest point, and how do you try to take advantage of it?

Lord Zion: We all get along with each other.  We all like each other.  This means that we can concentrate the fight outward rather than inward.  I see so many bands where all their energy is put into resolving conflict among themselves.  That is one reason why we fired our last guitar player – he was a fly in the ointment so he had to go.  It is hard being in a band so you all have to stand strong with each other and be the smallest army on the largest battlefield.  No-one will ever do anything for you so you have to fight for everything you get.  You can only do that if you stick together.

Rockpages.gr: The music industry is suffering at the moment, and a lot of changes will eventually happen to the way music is distributed to people. What do you think might help musicians and bands to get what they deserve from their music, and not be the victims of illegal downloading and file sharing?

Lord Zion: Illegal downloading and file sharing is here to stay, I think.  Bands have to be smart.  CD’s are no longer a way to distribute music, but they ARE merchandise.  Put effort into them, make them attractive to the buyer and people will want them.  A lot of bands see that CD’s don’t sell so they put no effort in then don’t sell any and come to the conclusion that CD’s don’t sell.  In other words, it is a self-fulfilling prophecy.  Well, CD’s do sell and can sell, if you package them right.  It is a dirty word but bands are a product, a brand.  Make your product and brand strong and people will want it.  Reach out to your audience, connect with them, show them what you have in common and they will relate to you.  Make them part of your world and give them some ownership of your destiny.  People like to be a part of something, not just passive viewers.

Rockpages.gr: If you could invite any of those three individuals at home for dinner, who would you invite, and why? Nikki Sixx, Lemmy, Ozzy Osbourne

Lord Zion: Ozzy, I think.  He is the funniest and we all want to laugh, right?  I can’t see Nikki Sixx being much fun to be around – a bit intense.  Lemmy would also be good fun but, as I’m not a drinker, I’m sure he would find me anathema!  So, yeah, I’ll stick with Ozzy. 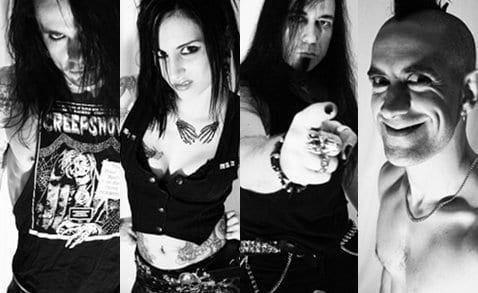 Rockpages.gr: Greek fans haven’t had the chance to watch you live so far. How would you describe your show, and what’s a good reason not to miss that, when you eventually make it to Greek soil?

Lord Zion: Yes we will!  We are doing a show in the UK very soon for a Greek promoter who has promised to help pave our way to Greece.  If our agent is to be believed, they are in serious talks for us to play a few shows in your fine country and we CANNOT WAIT!

What can I say about our show?  It’s intense.  It’s fun.  It’s lively.  It’s action-packed.  It is everything you could possibly want from a gig.  Simple.