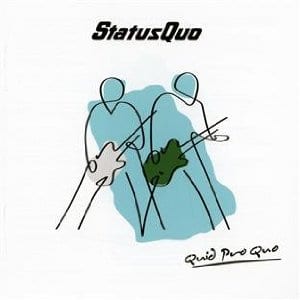 Even if you told Status Quo that their 28th(!) album was going to be one of the best in their career, they wouldn’t think that you were serious. The truth is that the band, which is something like a trademark for Great Britain and its culture, in the same way as the rainy summer, and warm beer, managed to succeed another triumph by sticking to its guns, and following its own three-chord recipe.
And that’s because Status Quo are not doing a single thing different than on the previous 27 albums! Surely, they do it much better than their last two, “In Search Of The Fourth Chord” and, “The Party Ain’t Over Yet”. The difference is that while on those two you could find only a couple of really great songs, on this one you should look very hard to find a filler! It seems that the inseparable duo of Rossi and Parfitt followed the example of… KISS, and likewise released a tribute to themselves, and their 44-year long career.
You will find some references to the past, with some riffs, and a couple of melodies, which are totally intentional, but the new material doesn’t have to look back, and my only objection was the re-recording of “In The Army Now”, that the album didn’t need to shine!
“Quid Pro Quo” is the album that will surprise positively the band’s millions of fans in Great Britain, and everywhere else in the world, that especially in their home country are selling out every venue Quo appear on. I wish that all the other bands of the same, or close class can do something like that.