The time is closing for Iron Maiden’s return on Greek soil! Their shows is without a doubt the highlight of the year. After a long time of absence they are coming back and this time we asked for the artists’ experience of the Beast! When was the first time they saw them live, what’s their favourite album (the toughest question) and a personal story. We’d like to wholeheartedly thank Gus G (Firewind), Yiannis Papanikolaou (Diviner, Rock’n’Roll Children), Jack Starr (Jack Starr’s Burning Starr), Kevin Goocher (Of Gods And Monsters, ex-Omen), Larry Baragan (Helstar), RD Liapakis (Mystic Prophecy), Thanasis Hatziagapis (Sorrowful Winds, Maidenance) and Matt James (The Raven Age). Yiannis Dolas 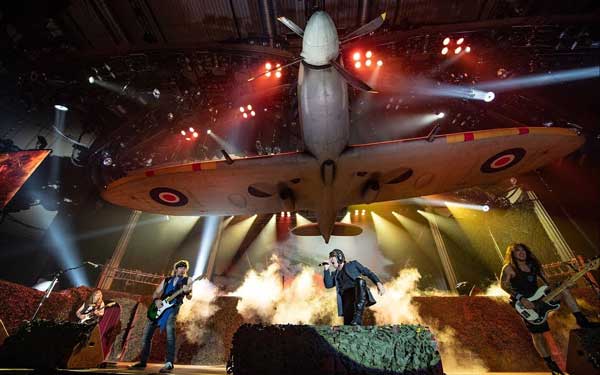 Gus G: I first saw them live in 1995 during the “X Factor” tour in “Ivanofio” stadium in Thessaloniki. Back then I was young so I didn’t care about Blaze Bayley, or Bruce Dickinson… I didn’t have such issues in my head yet, so I was impressed by an amazing heavy metal show… the next time must have been at the Ozzfest in 2005, ten years later, when I was touring with Arch Enemy and they were doing the “Early Years” tour. I must have saw them 18 times on that tour. The only day I didn’t see them when the thing with the eggs happened. For some reason we left early that day, we took the bus and went to the hotel. The next day I saw online that all hell broke loose about this and I thought “holy shit, what happened, how did we miss that?”

My favourite album… I know you asked for one, but I will give you a runner up as well… One of their most special albums to me was “Piece Of Mind”. However, I will give you the runner up, because for every kid the first album they’d listen from a band is the most important. Because, you connect it with the specific time in your life when you still learn about the band, you see the cover and you realize that it has a special place for you. So, for me it was “Fear Of The Dark”. I remember when this album came out in 1992. I remember I was seeing it in record stores and that was when I started to realize things about heavy metal. I thought it was very evil! Hahaha! 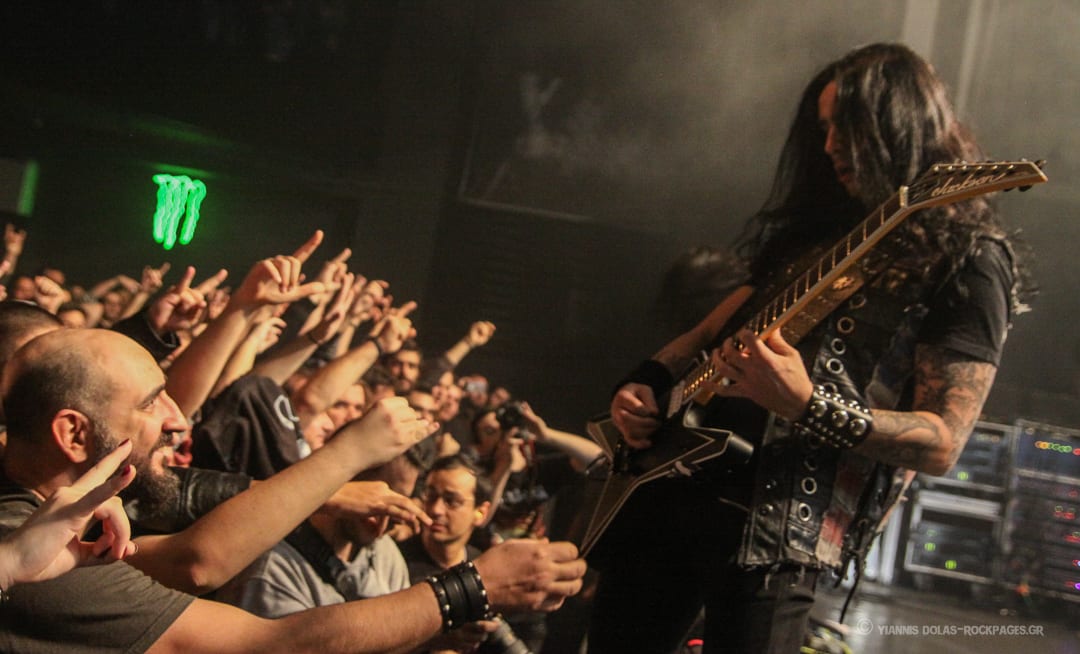 I really feel lucky for witnessing Maiden in the ‘80s  when they were constructing their myth with their consecutive masterpieces. They are by far my favourite band. I’ve been following them since “The Number Of The Beast”, which was their first album I ever listened to and got me stuck! Really romantic times back then, their popularity was growing album by album. There was heavy metal and then there was Maiden, light years away the were the pioneers in everything they did and what they did was an inspiration and big news for the heavy sound. It was our flag against misery, decay and the pussies back then!

What can I remember? When “Powerslave” was out I went down to Happening record store to buy it and the street was closed because of the people that were gathered waiting to buy the album which was out of stock already! The Maiden madness was out of this world. There were the times when we’d listen to their albums from dusk till’ dawn, dreaming with their music and their albums’ covers, Iron Maiden were our whole universe… and still they are! Finally, in 1988 with their divine “Seventh Son” they played in Greece. I was in high school and we skipped our class that day with my friend Stefanos. We left at 2:30 to arrive in Nea Philadelhia at 4:30 by public transport. Doors opened at 6:30 and Iron Maiden came out at 8:30. The rest… is history as they say. Maiden are not just the top heavy metal band… it’s a viewpoint for everything, even outside music, it’s philosophy, a way of thinking, and a positive attitude towards life, to love to learn, love the people, love the music, strive for the best, try harder and appreciate every moment in life. They are too larger than life personalities, Steve, Bruce, Nicko, Dave, Adrian, Janick that enchant you. And that’s why they cannot be compared with anyone else, we love them madly and our relationship is unique. The others are just bands, Maiden are gods! That’s all! 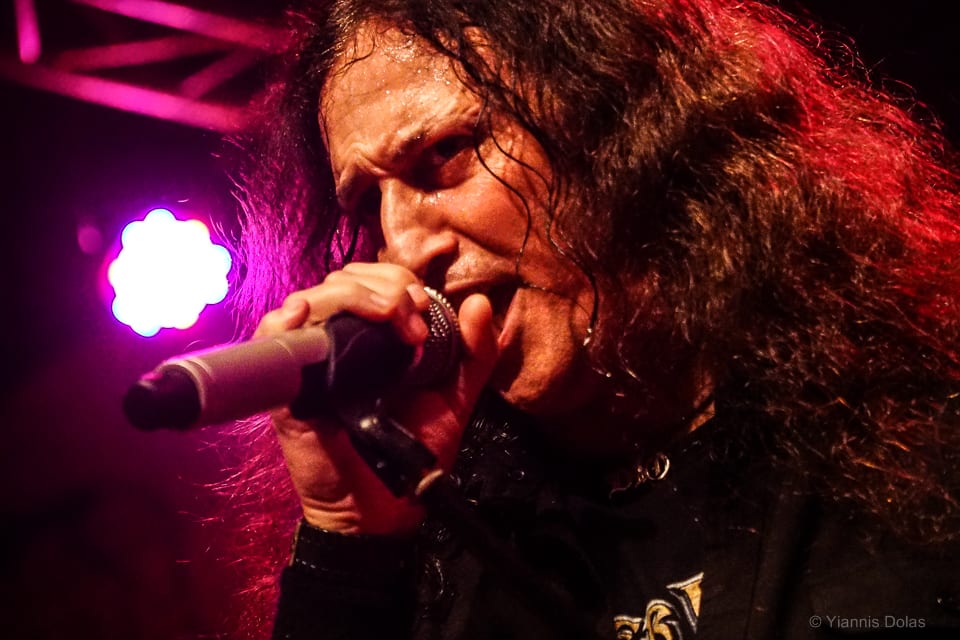 I remember seeing Iron Maiden for the first time. It was on the Number of the Beast tour and they were supporting the Scorpions. I had only heard a few Maiden tunes thus far but was excited to see them. But, one of the most enthralling things happened that night. It was the first time I had ever been to a rock concert where the entire crowd were all so in sync together. During their performance of the title track to their then latest album, every time the part came around…666…the horns went up in the air and the audience was louder than the band. At first I thought the place was gonna riot. But, by the end of the song it was evident that this show was gonna be like a religious experience. 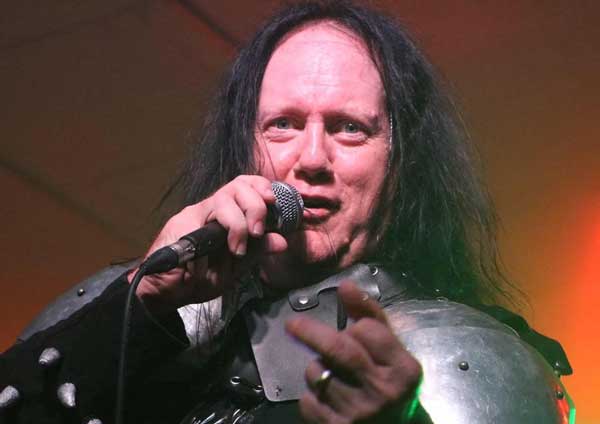 Iron Maiden is a great band and I think what makes them so special is that everyone in the band is extraordinary at what they do ,for instance Bruce Dickinson is a powerful vocalist with a great range and I knew this when I first heard his first band Samson also Nicko McBrain is a wonderful drummer whose solid drumming is the perfect style to create an anchor for the complex riffing of their material which leans towards the progressive side. An interesting side note is that Nicko played drums for a brief time with French metal band Trust that I also performed with very briefly and was honored that they recorded one of my songs “Seventeen” I am honored that sometimes my band Burning Starr is compared to Iron Maiden but in truth they are not an influence on my songwriting not because I don’t think they are great which i do but because I am around the same age as the guys in Maiden and I probably listened to a lot of the same music growing up and had many of the same influences. 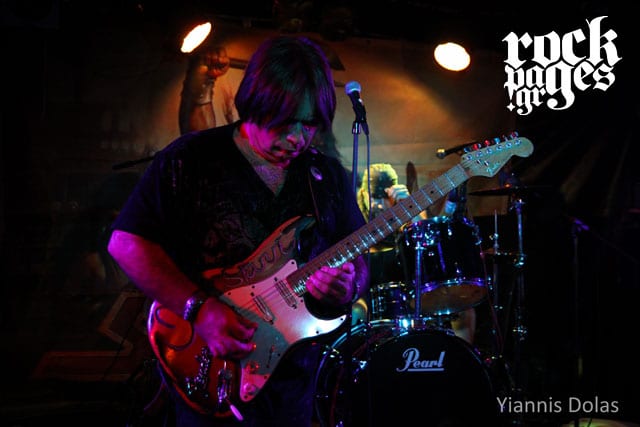 There was a huge record store here in Houston that sold everything under the sun! They had a special metal import section that I would always check out. I remember flipping through the albums and coming across this amazing album cover. It was so bad ass that I thought, “this has to be bad ass! Look at the cover!!”. I bought it without even hearing it. I took it home and the world as I knew it changed. It was the most powerful, original metal album I had heard to that point in my life. Then Killers came out about a year later and that album cover was even better. So, again I thought in my head, “well this has to be better! Look at the cover!”. I put it on and it completely blew me away! I had the pleasure of seeing Iron Maiden blow away Judas Priest on the Killers tour. I remember walking away from that show wondering what in the Hell was Judas Priest thinking? Those are my favorite albums and that’s my favorite line up as well. They were a huge influence as you can clearly see on the very first Helstar album. 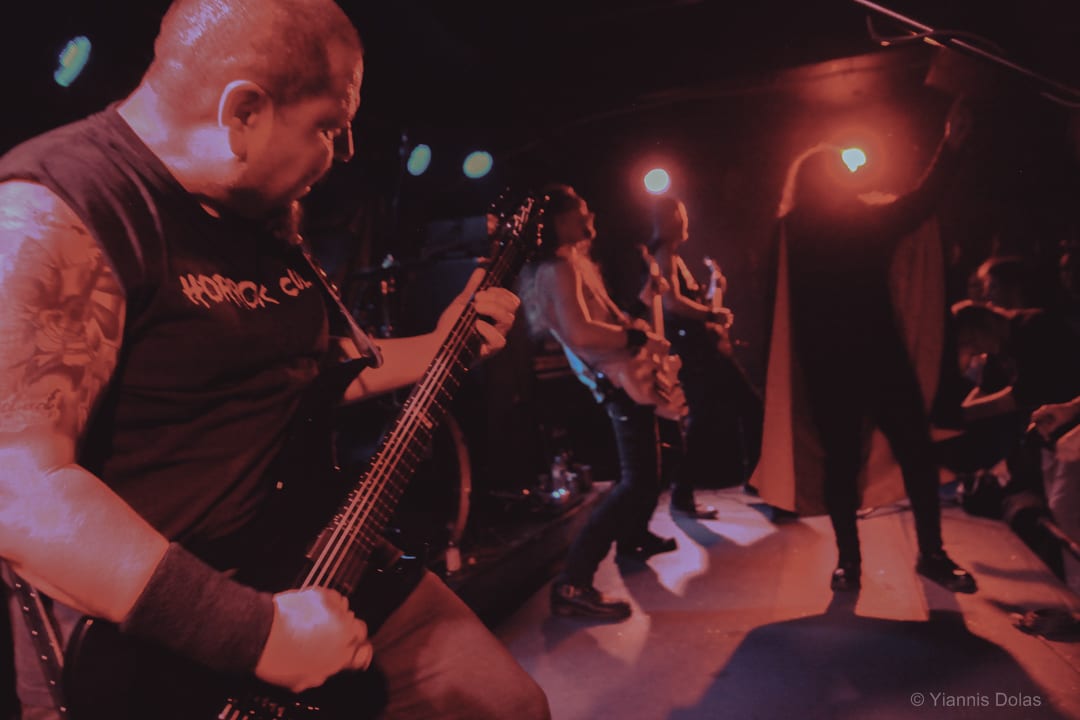 I’ve seen Iron Maiden more than 10 times… in the ‘80s just like now they were a band that had an ace on their sleeve. In a few words they didn’t have an expensive stage image and that made them the first band in a lot of aspects. The biggest surprise for me was when I listened to “The Number Of The Beast”, one of the top 5 heavy metal albums ever in the music industry that even now is hugely influential for loads of fans and musicians that lead them to play music. 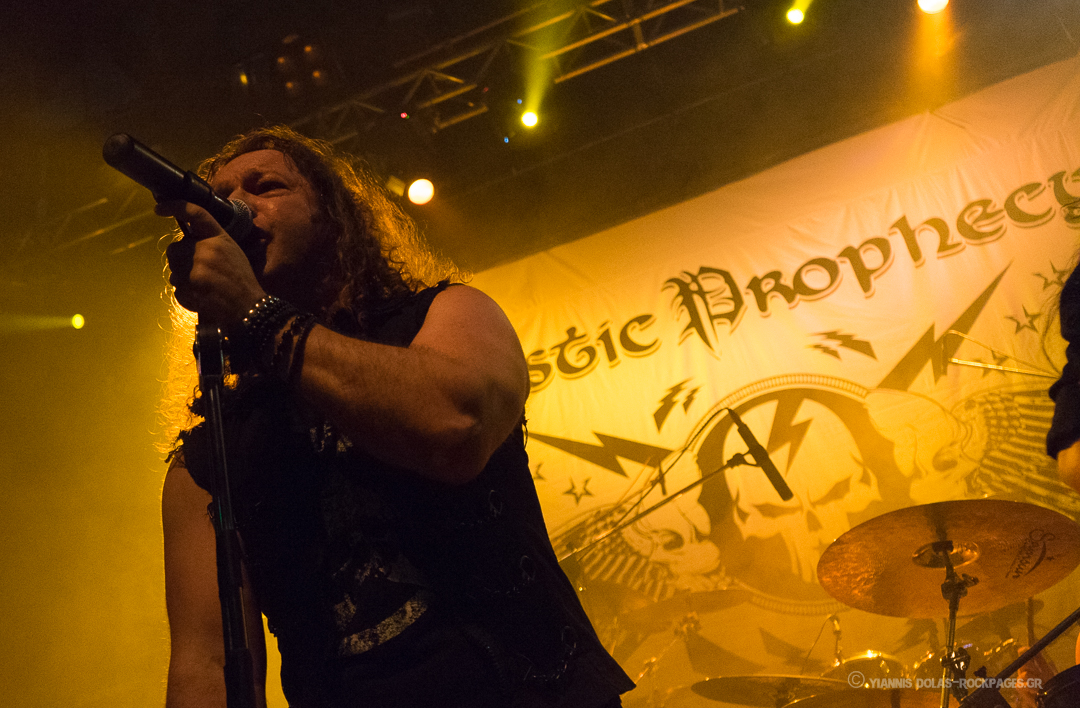 I entered the Iron Maiden world through the video for “Flight Of Icarus” when it was aired, that was a surprise, in a music TV show banc in 1983 in Greece. The heavy, dominant and mysterious images and music made me purchase immediately the brand new “Piece Of Mind”, which to this day remains my favourite Iron Maiden album. My record collection started growing including their previous works (with their amazing covers) as well as contemporary, or older representatives of the genre that I had recently discovered. It was time to see all those heroes live and especially Maiden, because everytime they had a record out the rumors about a possible visit to Greece were spreading like wildfire. That was meant to happen in 1988 for the first time and it was amazing experience! Nowadays, Maiden still have a great place in my heart having accompanied me for years with their work and its exceptional aesthetics that is reflected, musically, visually, lyrically giving me great excitement, as well as disappointment ( for instance Blaze era) always true to their identity that has become a  big part of ours as well… PS: I run into Steve Harris in 1992 and when I asked him if they were planning to play another show anytime soon, he reassured me that they were going to on September of that year, which never happened! 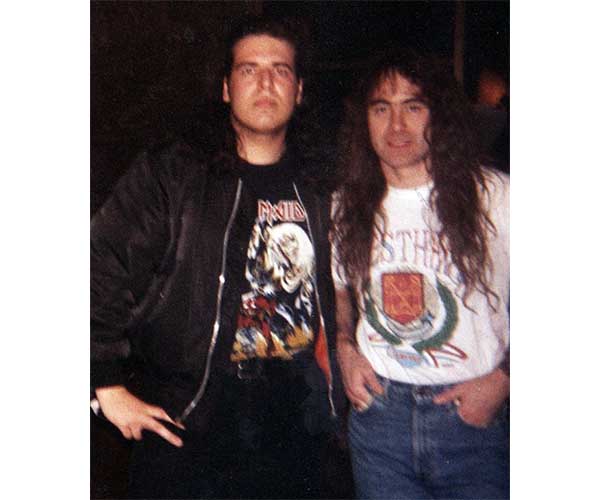 I’ve been a life-long Maiden fan. I’ve literally grown up with Iron Maiden since a very very young age. The first album I ever bought was “Best Of The Beast”, I think I was seven years old. Maiden has been beyond an influence for me. If it wasn’t for Iron Maiden I wouldn’t do what I am doing now. I’ve listened to them my whole life. One thing that makes Maiden so special is that they never cared about what other people are doing. They do what they do so individual to them and they’ve carried on. A big part of that is obviously Steve and his vision of what he wanted Iron Maiden to be and you know they’ve become a worldwide lifelong phenomenon in music and that’s such a credit to any band that’s looking to make a success in the music industry. To look up to a band like Maiden, how they’ve done things. How they’ve not listened to the norm, they went against the status quo and did their own thing. For me that’s the most important thing in making it in the music business.

In terms of the live show I challenge anyone to say that they’ve seen a better live show than watching Iron Maiden. And I’d tell you what this “Legacy Of The Beast” is probably one of the best they’ve ever done. It’s amazing! It’s unreal!
Even if you are not a Maiden fan you have to see it! My favorite album is… it’s very very hard. I have a tie between two, it’s a tie between three really… if I had to twist my arm… you see everybody knows that “The Number Of The Beast” is one of the greatest albums. For me personally it’s between “Seventh Son…” and “Brave New World”, because of my age. That was a very crucial album when I was growing up. 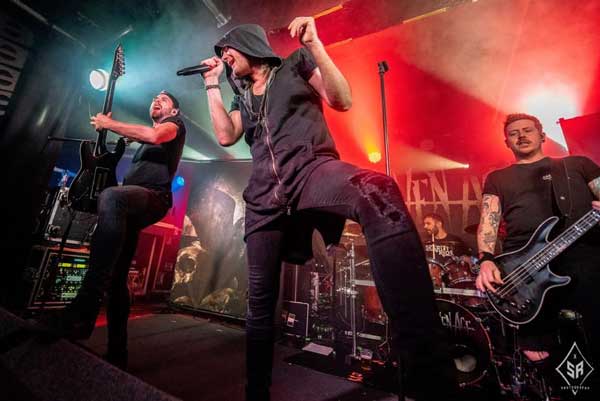