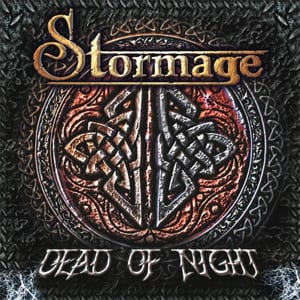 Stormage is a band from Germany, playing (what else?) Teutonic metal. With two releases in 2005 and 2008 (according to their page), they are coming back in the year 2017 with 10 new compositions. Τhey have a modern production and some nu metal elements (from my perspective), while their songs have quite epic choruses. Their sound, as a whole is that of heavy/power metal.

The main drawback I spotted with the first hearing are the vocals of their lead guitarist Heiko Heseler, which are of limited range and I believe they do not match the style of the band.
I think that for what they play, they need a totally different type of singer. His voice would fit in a hard rock band and that can be heard on the slower moments (e.g. “Prime of life”) where it fits like a glove. A power / ballad composition is the best song of the album, 6 minute long “Victims Eyes” , while from the rest (split into mid and up tempo paced) I singled out “Anguish of mind”.

The album can be pleasantly listened to, and has some very intense moments, but I think that if they hire a permanent singer (not Kotipelto but to that direction …) and work to find what will make them stand out, they will do much better.They surely can!