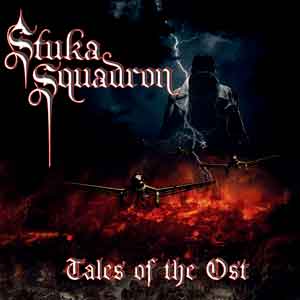 Cool name, isn’t it? Despite the fact that it brings immediately in mind the selective German air unit of the World War II, the band has absolutely nothing to do with the national-socialistic theories and has no affiliation whatsoever with the white supremacy movement. But, as the mighty Lemmy says, it’s nobody’s fault that the Germans back then had the best uniforms and the coolest squadron names…so, who are we to argue with Lemmy?
Stuka Squadron is a British band and “Tales of the OST” is their debut full length album. With a lyrical approach that brings forth subject like war and the aftermath in the battlefield and a musical style that vividly reminds of such giants as Maiden and Priest, Stuka Squadron leaves us with the best impressions keeping at the same time the level of interest at a constant high especially due to some much inspired intros before the songs that perfectly fit with the overall concept of the album. The absolute standout moment belongs to the catchy closing track “We Drink Blood”.
Stuka Squadron…keep that name in mind…I think that the future lies promising ahead of them.