Suicidal Angels released one of the best albums of 2019 in my personal list and they are getting ready for another devastating show in Athens and for a mini tour in Greece. The founder, guitarists and singer Nick Melissourgos was relaxed on a bench somewhere in Switzerland and our conversation was something much more than a typical interview, as it lasted for one hour(!!). A very cheerful guy, he answered about their new album and the history of the band among other things. Here are the most important excerpts. Interview: George Terzakis 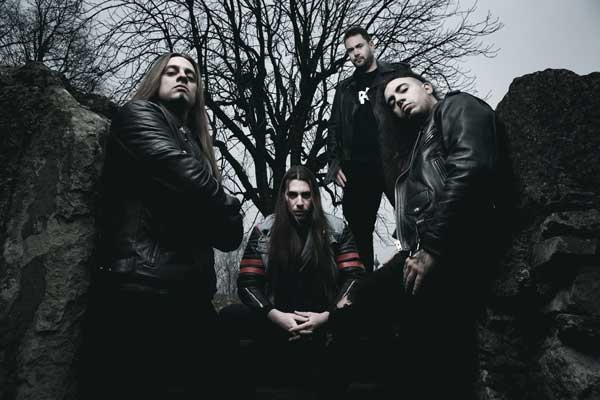 Rockpages.gr: Hi Nick and congratulations on your new album. I think that it’s the best you’ve written until now. What feedback do you have so far, compared to your previous works?

Nick Melissourgos: Hi George, thank you very much for that. All the albums since “Bloodbath” entered the German and Austrian charts, but in low places like 70 or 80. Of course, it’s still a big thing because it’s hard to get in there. The last album reached the 33rd place in Germany and about 60 in Austria and Switzerland. It was a big surprise for all of us, the band members and the label. We didn’t expect it to tell you the truth. In general, the reception is excellent so far.

Rockpages.gr: As for your music, we can see an evolution through the years. From the relentless attack of the first album, you wrote mid-tempo songs, you put melodies and other elements. The same happens in “Years Of Aggression”, as there is a lot of variety, especially in the last one “The Sacred Dance With Chaos”. How did all this come up?

Nick Melissourgos: The music grows and evolves, so we do as human beings. The experiences of 20 are different from the ones of 34. It’s something that comes naturally. I don’t try to write with purpose, it takes away all the magic. For example, I was trying for years to write a song like the one you mentioned. I needed this, as a person, but there was never the right idea. As for the variety that you said, I believe that there are nine tracks completely different with each other. Of course, there is a connectivity, but in the end, this is a thrash metal record.

Rockpages.gr: The album is entitled “Years Of Aggression”. Is this a statement for the situation in which we are living the last years? It seems that there is a lot of hostility in the society.

Nick Melissourgos: Maybe there was always and we couldn’t see it. The title has a double meaning for me. It reflects what happens in the world, but we also wanted to make a description of the band’s course until now. As for what we experience each day, it’s unbelievable. People seem to forget what happened before 50-60 years. I think we lost respect towards ourselves and as a consequence towards our fellow men. We look only after ourselves and not in the good way. 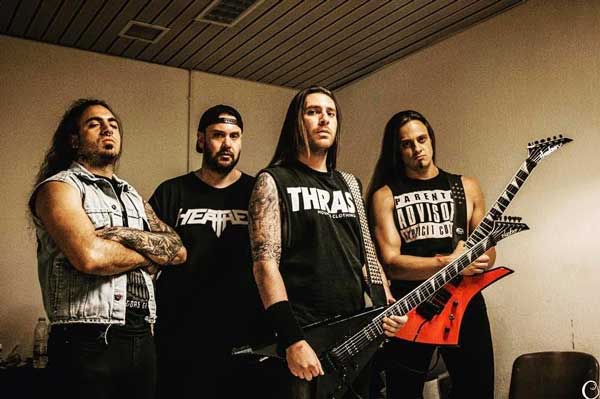 Rockpages.gr: Tell us a few things about the songwriting process. How is the procedure? Do you keep older ideas or is everything new?

Nick Melissourgos: No, there are no old ideas. For this album we rehearsed thirteen songs, nine got in and four didn’t make the final cut. We don’t keep anything for the future, everything is being written from scratch. As I told you before, we want to evolve, so something older wouldn’t fit here. The majority of the ideas start from me, so when we are gathered together, we discuss about what we like and what not. When we decide, we start working on them. Also, to keep something we all must like it. It’s respect towards ourselves and of course towards the fans, as they keep us alive all these years. If I don’t bang my head in the studio while playing it, how will you do it when you listen to it?

Rockpages.gr: How long did it take for you to finish it?

Nick Melissourgos: We started around August of 2018 in Germany, in Soundlodge Studios with our friend Jörg Uken. We wrote the drums there and took us about ten days. Then, we got back in Greece and spend about three-four weeks in Zero Gravity Studios for guitars, bass and vocals. Finally, I got all the files and went to Sweden in Fascination Street Studios where Jens Bogren did the mix.

Rockpages.gr: So, it took you almost one years to be released since you started.

Nick Melissourgos: Well, it was done about 90% in October, but we let it breathe for sometime because when you work two months non-stop for an album you go deaf, so to speak, you can’t tell things apart. We wanted to take some time off, we listened it again and the final mastering took place in February 2019. Then, it took six months for the rest, such as finishing the album cover with Ed Repka, going to the factory for printing and all the rest.

Rockpages.gr: It’s the longer period between two of your releases, as it took three years in total. What held you back?

Nick Melissourgos: Nothing did, there were just too many live shows for the band. We did four European tours for the previous one, there was a line-up change and a new guitar player came (Gus Drax), so we didn’t have time to sit down and write music. 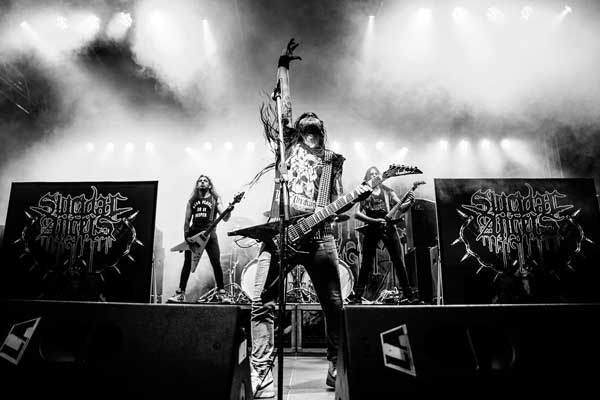 Rockpages.gr: Let’s go to one of the videos that you made for the new album. If I’m not mistaken, “Bloody Ground” is the first one that was shot outdoors. What can you tell us about the location?

Nick Melissourgos: Yes, it was the first one and we did it in a former NATO base. It’s on a mountain above Eleusis with terrific view. As I’ve learned, they will move the prisons of Korydallos there, so we chose it just in time.

Nick Melissourgos: It was 2001. I woke up one morning with hangover and saw a small piece of paper with the name Suicidal Angels on it.

Rockpages.gr: So, I will ask the obvious. Did you expect that you would go so far? Not necessarily to make tours around the world, but if you would still play music after all this time.

Nick Melissourgos: Look, in this question you will write a lot of stuff (laughs). I was still in school when I listened to “Show No Mercy” and blew my mind away. So, I decided that this is what I wanted to do and started by playing covers with some guys from school. I was booking rehearsals on weekends, but I was going alone, no one came. There was no big interest. We also recorded a shitty demo.

Rockpages.gr: That was “United By Hate”, right?

Nick Melissourgos: Yes, that one. There wasn’t thrash metal at this point. We told people we were playing thrash and they looked at us as if we were aliens. After school, when me and the guys split, I met Orfeas (Tzortzopoulos, drums) in 2003 and found someone to rely on. We played shows wherever we could, but still there was no thrash anywhere. We sent many promos to labels and got no positive responses, there was no interest at all. It was 2006 when we released our first EP “Armies Of Hell” and I was all the time in the post-office, sending it wherever I could. The only label that replied was Old School Metal Records from United States. After the first album, the situation got a lot different and we started wondering what was going on. We also played that show supporting Kreator in Athens, where Mille Petrozza came and asked for a t-shirt.

Rockpages.gr: Yes, I was on that show and I wanted to ask you about it. He did it during the encore, right?

Nick Melissourgos: Yes, I remember it like it’s now, I got chills down my spine. It was before our first album and this was a big shock. The second, bigger shock, was when he mentioned us and Legion Of The Damned in his interviews about the new generation of thrash metal. And we arrived in 2009 when we entered the contest for Rock The Nation Award with 1.200 bands and won a record deal with Nuclear Blast. They told us we won and we lost the earth beneath our feet. Then we started tours with Kataklysm and Overkill. I remember Bobby “Blitz” Ellsworth telling me that if it wasn’t for us and a couple more bands, they wouldn’t play right now because we started the thrash revival. 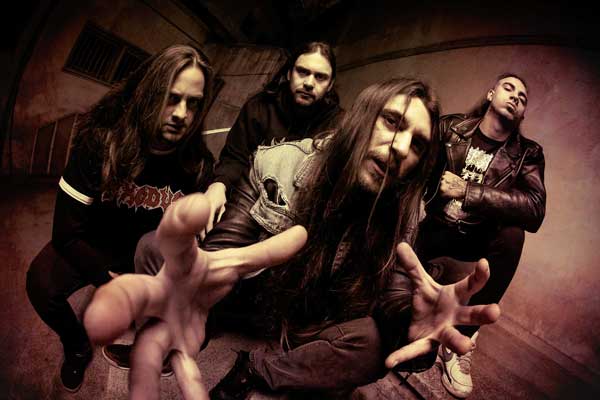 Rockpages.gr: Also, in 2013 you took the decision to move abroad. How did this come up?

Nick Melissourgos: It was an idea we wanted to try. The truth is that the airplane is not convenient in the summer when you have to play in many different festivals. We got back, but we didn’t shut the door permanently. If necessary, we can leave again.

Rockpages.gr: How long did you stay and how did you get by? Did you have day jobs as well?

Nick Melissourgos: We were for two years. Not day jobs, just full-time shows. When you are in Germany, everything is in driving distance so we were on the road all the time.

Rockpages.gr: So, how did you decide to come back?

Nick Melissourgos: Our new guitarist came along, so we had to come and rehearse with Gus. Orfeas needed to return anyway for an operation, so we came back. The truth is that we had it in our minds as an idea for some time before that, so these events helped with the decision.

Rockpages.gr: You mentioned festivals, so what are the five most memorable live experiences for you?

Nick Melissourgos: We played in Wacken in 2010 and the next day we were headlining a festival in Ukraine, in a holiday resort in Black Sea. We had a very tight schedule until we got there and it was insanely hot, they even poured water to the fans with fire hoses to not lose their senses. Another one was Copenhell Metal Cruise 2019. We lost a flight and had many delays until we arrive. When we got in the ship, it already had raised the anchor and was about to leave. Of course, the whole tour of Thrash Fest 2010 with Kreator, Exodus and Death Angel. I will not forget our first headline tour back in 2014 with Fueled By Fire, Lost Society and Exarsis. Lots of stress, but it was a big success after all. Finally, it’s very hard to forget the gigs in Greece, as they always have something special.

Rockpages.gr: As for your show in Athens, Piraeus Academy is the biggest venue you’ve played as headliners. What do you have to say about this show?

Nick Melissourgos: We always want to do something different when we play here. So, we thought about choosing a big venue with two bands who don’t play the same as we do. To have a comfortable space and spend our night nicely. Both band that will play with us, Full House Brew Crew and Domination Inc. are amazing guys, they released great new albums and they are making big steps forward. We will give 200% to make this night unforgettable to whoever will show up.

Rockpages.gr: How easy or hard is to choose a setlist after seven full-length releases?

Nick Melissourgos: What to choose, are you kidding me? But these are very pleasant dilemmas. We will have enough time on stage, one and a half hour for sure, maybe two. So, we will play lots of songs, maybe even jam a bit. We will see, it depends on how many beers we will drink until then (laughs). 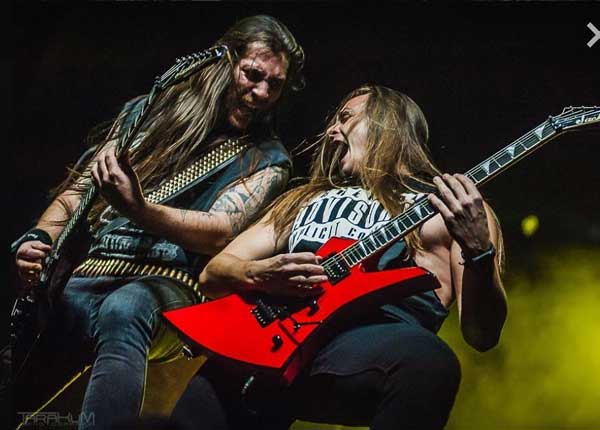