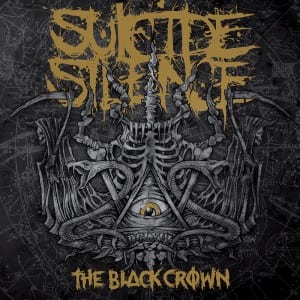 Suicide Silence is an American extreme metal (metalcore+death=deathcore? whatever!) band which formed in 2002. The band’s first release was in 2005 (EP) and two years later, in 2007 Suicide Silence released the first full-length album entitled “The Cleansing”. In total, Suicide Silence released three full-length albums with the blessings of Century Media (2007-2011). The latter, released in June, is “The Black Crown”. According to Billboard magazine and CD sales, Suicide Silence album ranked in position No.28 in Billboard 200 and you’d probably wonder why it took me so long to write about this album. To be honest, its “raw” sound troubled me.

Within the 39min. and 19sec. of headbanging there are three tracks with guests… “Witness the Addiction” features Jonathan Davis of Korn (track No.7), “Cross-Eyed Catastrophe” features Alexia Rodriguez of Eyes Set to Kill (track No.8) and “Smashed” features Frank Mullen of Suffocation (track No.9).

“The Black Crown” is a deadly combination of the darkest elements of death metal and “groovy” techniques of metalcore.