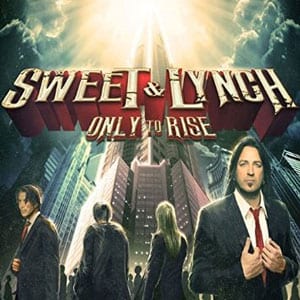 It’s really a wonder how these fabulous musicians haven’t worked together in the past! “only To Rise” is a quite fitting and impressive record that shows beyond any shadow of a doubt that Michael Sweet and George Lynch had worked tirelessly in delivering a bunch of remarkable songs that reminds a lot of the atmosphere of the early 90s. It is only natural that Sweet’s voice brings forth memories of those classic Stryper records but the most important thing is that it remains in high standards as Sweet faces absolutely no problem whatsoever in reaching even the most demanding note. Lynch’s guitar is…well, it is the trademark George Lynch guitar that everyone expects from him. It is no wonder why this man is regarded to be one of the last guitar heroes in the music business and “Only To Rise” proves it once again. The line-up is completed by Brian Tichy (Whitesnake, Foreigner etc.) and James Lomenzo (White Lion, Lynch Mob, “Megadeth”) who are also doing a satisfactory job.

The songs themselves could have easily found a place on a Lynch Mob record or a solo outing by Michael Sweet. They set out freshness and a dynamic aura and they can actually be compared to one of the recent Dokken albums. The two musicians are not trying to recreate the 80s sound –that would be too easy for both of them- and they manage to hit the pedal to the medal with songs like “Recover”, “Time Will Tell”, Like A Dying Rose” or hit a more sensitive chord with “Love Stays and “Me Without You”. We will say it once again that the hard n’ heavy compositions could belong to a Lynch Mob record or a solo Michael Sweet effort…I guess that says it all!

“Only To Rise” honors the past and the rich legacy of Lynch & Sweet but also glimpse clearly into the future.

Highlight: It’s hard not to think of “Wasted Years” (Iron Maiden) when you listen to the guitar intro on “September”…