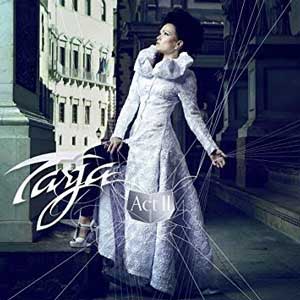 One thing that I gotta give credit to Tarja is the fact that since her departure from Nightwish she never attempted to be a musical clone of them. Her path is clearly different and in some aspects evolves by creating constantly new and identifiable music something really evident especially in her last couple of releases. “Act II” shows exactly where Tarja stands at this moment in time. This is an artist that wants to be creative and not remain stagnant with every single release.

The album captures her live appearance at the Teatro Della Luna in Milan on the 29th of November 2016. This is a concert that focuses on Tarja’s latest sonic efforts but also includes cuts from other solo recordings plus a medley of the Nightwish classics “Ever Dream”, “The Riddler” and “Slaying The Dreamer. She looks and sounds in top form with an unparalleled theatrical approach in her performance while the touring personnel is absolutely amazing thus contributing a lot to the final result.

I must also note down that it is a great accomplishment for her that she hasn’t lost fans and her fan base remains steady and loyal despite her sonic departure from the trademark Nightwish sound.

All in all, “Act II” is a good suggestion for all the fans of the symphonic and –in some cases- progressive metal sound.