There are some artists/bands, especially popular to the Greek audience and I imagine that something similar happens to every territory and that regardless of the financial difficulties of present times, they will pay the steep price of the ticket in order to see them live even for the umpteenth time.

In an almost full Cagarin205, the first 45 minutes belonged to Crimson Blue, a significant and upcoming band from Russia, in an acoustic set with two guitars and the very beautiful voice of Dani Hellstr?m. Nice atmosphere, very good songs and a remarkable cover of “Bring me to life” by Evanescence.

It would be a tiring repetition to talk about how great Tarja’s voice is. I have expressed my opinion a thousand times; the Finnish is the greatest female voice in the wider rock and metal music industry in the planet. Other than that, her show in our country was one of her best, if not THE best. Her performing was better than ever before. Her stage performance was excellent and her communication with the audience was out of this world. The set list was the best possible and this is not only my personal opinion but also this of many of the people who attended the show. We heard all her hits from her personal discography, a wonderful cover of Peter Gabriel’s “Darkness”, “I Wish I had An Angel” from her service with Nightwish, as well as Gary Moore’s “Over The Hills And Far Away” which she had sang really successfully with her former band. That was also the closing song of a great show which lasted for 105 minutes. We also heard a brilliant new song which, as she said, she has written recently with the title “Deliverance”.

Mike Terrana’s absence at the drums was both obvious and beneficial. The show was literally liberated. Some drum solos and some other things that made Tarja’s shows slacken in the past, are now missing. Terrana is a great drummer but his presence in this band was too much, as we say, for their needs. The unknown (to me though) Thomas Heinz was what that band needed for the drums. The audience, consisting of people of all ages, from minors to seniors, left the show obviously excited applauding unceasingly a great artist who continuously paid back the love she received. It was a show which, for many reasons, the audience needed and which I foresee that will take place again really soon. We want to see Tarja…until our last breath……

Setlist: In For The Kill, 500 Letters, Little Lies, Falling Awake, I Walk Alone, Anteroom Of Death, Never Enough, Darkness, Neverlight, Mystic Voyage, Die Alive Deliverance, Medusa, Victim Of Ritual, Wish I Had An Angel, Until’ My Last Breath, Over The Hills And Far Away 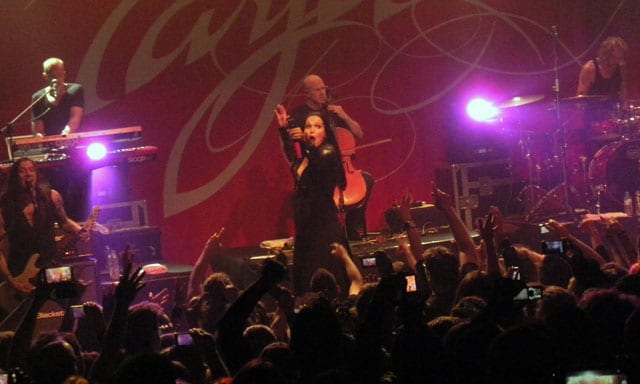