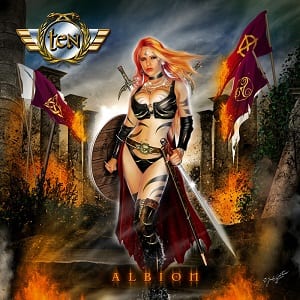 New and highly anticipated album from Ten. A band that has given us so many great albums in the past and always had an unquestionable quality in all of its releases.

A lot had been said about the album before it was even released. First and foremost about the production. Certainly the production by Gary Hughes (with the help of Dennis Ward in mixing and mastering) is excellent and crystal clear; it is not easy when a band has got three guitarists such as today’s version of Ten.

But the most important aspect is the songs. These will determine whether the disc will last in time. And I think the album has very good songs. The style has become a little more hard rocking compared to the band’s latest releases with influences from Whitesnake and Thin Lizzy in some parts. Fans of Ten must have already singled out songs like “Alone In The Dark Tonight”, “Die For Me”, “Sometimes Love Takes The Long Way Home” and the absolutely awesome “It Ends This Day”. And there are other notable songs like “Gioco D ‘Amore” or “Wild Horses “…

Conclusion is that Albion is an excellent album that will please Ten fans and perhaps restore the faith of some others that had turn their back on the band the last decade or so. Both thumbs up!