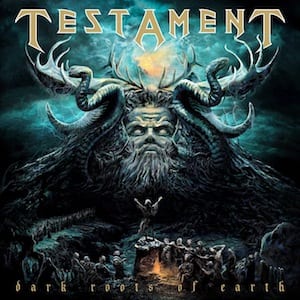 When Testament returned, in 2008, with “The Formation of Damnation”, few were those who expected such a dynamic and qualitative return that almost instantly “forced” the press and the thrash fans all over the world to characterize the album as a classic one…quite a fit for this time and age for a band that counted back then almost 25 years in the music business. Four years later and Testament strikes back with an album-dynamite and managed to achieve the unthinkable: they surpassed “The Formation of Damnation” with “Dark Roots of Earth”!
“Dark Roots…” is a fantastic, old school thrash record that will take all the traditional Testament fans by storm and probably will alienate all those who came aboard during the death metal period of “Gathering” and “Demonic” (but those weren’t pure Testament albums, right?).Personally, I marked two strong differences in comparison with “Formation”. The first is that almost all the death metal elements have been erased. I underline the word “almost” because there are a few traces here and there (eg. in the song “True American Hate”). Generally speaking, though, it is a true Testament album. We must give credit for that one –and this is the second different point- to Alex Skolnick who contributed to the majority of the compositions and his presence is greatly appreciated.
As a closing note, I’d say that this is by far the best Testament record in 20 years and that says it all! Every true thrash metal fan should go out and buy the album…period!
Highlight: The limited edition includes three cover versions of such bands as Queen, Maiden and Scorpions. Especially the rendition of “Powerslave” is brilliant.