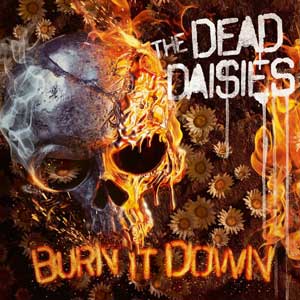 The “newborn” Dead Daisies features guitarist Doug Aldrich (Whitesnake, Dio), singer John Corabi (Mötley Crüe, The Scream), bassist Marco Mendoza (Thin Lizzy, Whitesnake), drummer Deen Castronovo (Journey, Bad English, Hardline), and rhythm guitarist David Lowy (Red Phoenix, Mink) so it can’t be anything else but an all star band. These rockstars are not the only members of the band, but there is also one more really important musician behind the production of this album, Marti Frederiksen. Frederiksen worked together with Aerosmith, Buckcherry, Ozzy, Mötley Crüe and Faith Hill. He is also known from his active involvement on being a part of one of my favorite rock movies of all time “Almost Famous” where he performed the lead vocals for the fiction band, Stillwater.

After all the above this is obviously not a new band, but a collaboration of five really important musicians who release a new album “Burn It Down” which is probably their best so far. This is a band with the right rock & roll attitude and that’s why The Dead Daisies is a well-established name in the hard rock music industry.

“From the ashes, from the flame. I’m here to light the fire again” is some of the lyrics that describe the band’s attitude best and it’s also their intro song “Resurrected”, which is full of heavy guitar and vocals.

I also picked up “Rise Up”, for the Black Label Society feeling I got and the dynamic of Corabi’s voice which almost overshadowed the guitar parts. “Judgement Day” is also interesting, mostly because it’s the most southern rock track of this album and I believe that many southern rock fans will love it.

David Lowy and Doug Aldrich turn up the heat and their volume as they dominate throughout the album, they are the main stars in most of the songs. One more song that stands out is the provocative “Bitch”, which I can easily imagine how would be perfect as a videoclip. Nevertheless, I loved the ballad “Set Me Free” which fits perfectly after “Bitch”, as it happens in real life when after a huge fight comes sadness.

The 80% of “Burn It Down” is mostly a heavy & desert rock album that many fans of various rock & metal music genres will find it interesting. Especially Ozzy fans.

That was really a great surprise for me, from a band that I would love to see live at least once more!