They could easily be regarded as a supergroup. They were founded by David Lowy, a successful businessman, who had a big dream: that was to be the guitarist on a big rock band with many respected musicians right beside him. The Dead Daisies are doing very well so far and right in front of me is Deen Castronovo whose resume is not only impressive but also sufficient enough to make this interview highly important and interesting. And yes, rest assured that we also talked about Ozzy… Interview: Dimitris Kazantzis 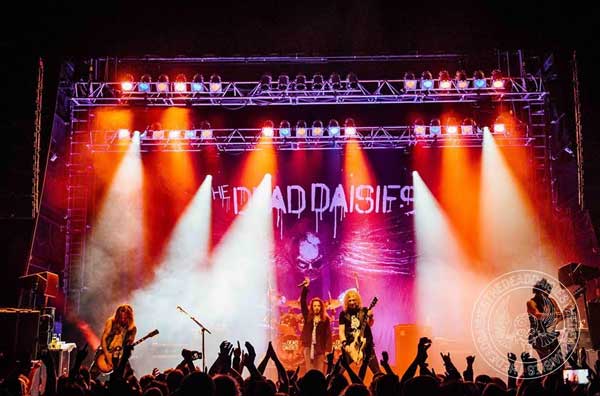 Rockpages.gr: Deen, you’ve been a member of so many legendary bands and you have a huge legacy behind you. Tell us how are things now with The Dead Daisies?

Deen Castronovo: Yes, you are right. It’s a huge legacy. Gotta tell you that I am having the time of my life right now playing with these guys. We are having great fun on stage and in the studio and this is the coolest thing for a band.

Rockpages.gr: The band is like an all-star band as it is comprised by well-known musicians but it is kinda strange that it was founded by David Lowy who was absolutely unknown in the music circles…

Deen Castronovo: Yeah, David always wanted to be a musician and although he built his reputation as a businessman, deep down he always wanted to play and be a member of a band. Now with The Dead Daisies he’s got his real outlet now. I totally get it. If I was in his position, I’d do exactly the same thing. He’s living his dream and that’s a beautiful thing.

Rockpages.gr: How does the whole thing work? Is it David’s project with revolving musicians or is it a normal band?

Deen Castronovo: I think that it’s a normal band that happens to have changed so far a lot of members. Probably that has to do with the fact that some of them get better offers or due to the intense working schedule of the band that burns out lots of people. The Dead Daisies is a real working band and I truly believe that the unit as it is right now is great and the chemistry is amazing. So, I’m hoping that everybody stays you know…(laughs) 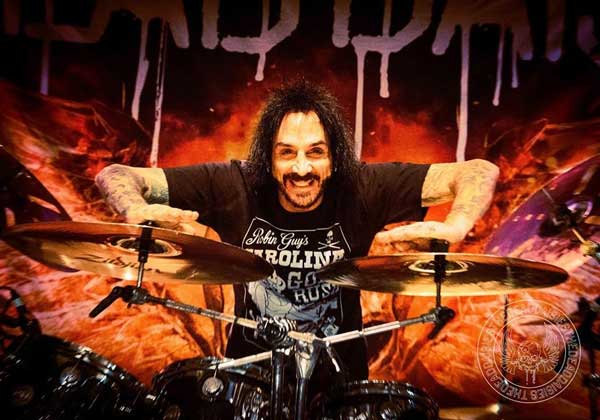 Rockpages.gr: What’s the feedback of the latest record “Burn It Down” six months after it came out?

Deen Castronovo: Oh, man…I love this record! For me as a drummer, I couldn’t be more pleased from the drum sound. I wanted to put my “Bill Ward Cape” on…you know, play like Bill Ward and that’s how approached the album. I wanted to have a classic Sabbath feeling on the record. I wanted that 70s sound; the songs are well-crafted…we got some great songs in there.

Rockpages.gr: I know that you are one of the basic contributors on the album. Tell me more about the whole writing process…

Deen Castronovo: I gotta speak for me so…I am quite busy behind the drums. I am a progressive kinda drummer and I always come up with various drum patterns which I think fit on the song. I think that I add something important to the music with my ideas and I meet the expectations of both the band and the producer. Of course, the other guys who are responsible for the basic structure of the music have total freedom and they are doing an excellent job themselves. They lay the foundation and then I come up with my ideas. That’s basically how we work. 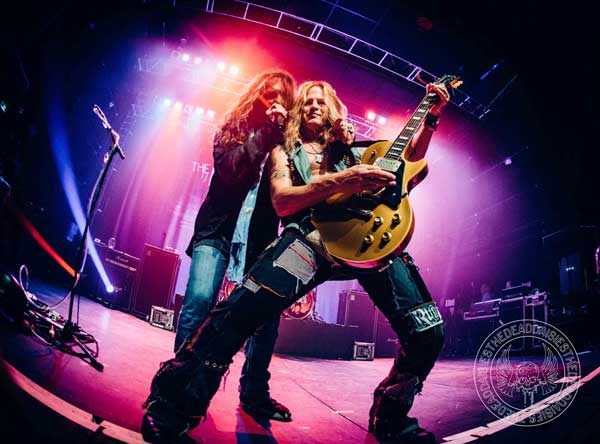 Rockpages.gr: You have played quite some shows in 2018. Are you thinking of following the same touring pattern in 2019?

Deen Castronovo: I’d say yes. We are thinking of going down to South America and probably do some festivals in Europe. Also, there is a talk of doing a new record, too. But nothing is concrete as we speak.

Rockpages.gr: How was the whole KISS Kruise experience a few days ago?

Deen Castronovo: Incredible! I am a huge KISS fan…they were my Beatles! I saw them when I was 7 years old and they were like Gods to me. I didn’t have the chance to speak to them but I saw Eric (Singer) and had a chat for a while. It was pretty intense and the fans were awesome!

Rockpages.gr: You have played in so many great records. If someone puts a gun in your head and asks you to choose just one record from all those recording albums, which one would that be?

Deen Castronovo: Actually there are two records that I am really really proud that I was a part of. The first one is Marty Friedman’s “Dragon’s Kiss”…I love that record and I had the chance to create some very interesting drum parts on this one. Also, the debut album by GZR “Plastic Planet” is awesome. That’s a monster record. As a drummer with those two records I come up with some great stuff that I am still really proud of. These are my favorite records. 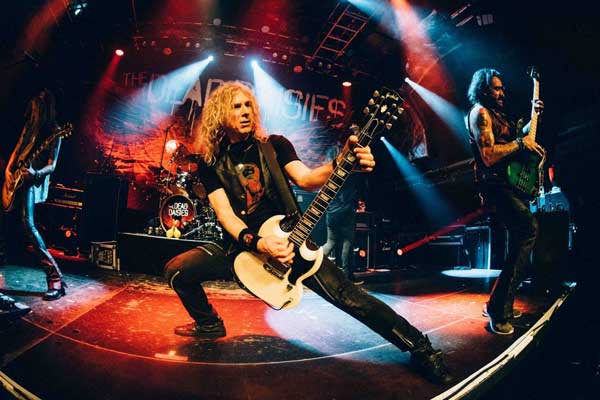 Rockpages.gr: As a musician, do you feel closer with Tony MacAlpine or Marty Friedman’s style?

Deen Castronovo: I think for me…it will have to be Marty because I grew up playing metal. Marty is the epitome of heavy riffs. He is probably my favorite guitarist and definitely I had a lot of fun playing with him.

Rockpages.gr: Do you think that Steve Perry will do some shows with Journey now that he returned with a new album?

Deen Castronovo: I don’t think he wants to. I believe that he just wants to do his own thing. Don’t forget that he was a member of Journey more than twenty years ago and he has gotten over it. I am just glad he’s back after all these years. He’s got the greatest voice in the world.

Rockpages.gr: You worked recently with Johnny Gioeli. Was it a bit nostalgic for you? I mean…revisiting the Hardline days…

Deen Castronovo: Not really. It was something completely new…the songs were already written. Obviously, when I was in Hardline it was different because we were there right from the beginning…we had started the band. Now it was different…as I said, the songs were already written and I just came in, did my vocals, did my drum parts and that was basically it. I must tell you that I don’t get so much creative freedom working with Frontiers…not so much. I do what I am told (laughs). 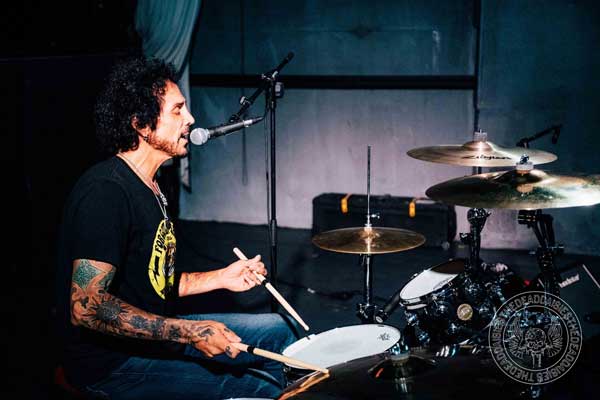 Rockpages.gr: Is it ok for you if I ask you to tell me a war story with Ozzy or we will have problems with his lawyers?

Deen Castronovo: I can tell you…there was a funny story. I don’t think Ozzy will be mad at me (laughs)…we were playing…I think it was in Mexico City and Geezer started playing something on his bass…Ozzy is standing right in front of me and he’s looking at Geezer. He looked absolutely scared…he pissed himself…it was funny as hell! Ozzy is a funny guy, man!

Rockpages.gr: What are your future plans?

Deen Castronovo: Tour, tour, tour! Make another record, too! Again, I tell you…we are a really hard working band. My years with Journey were awesome but it was kinda easy. The legacy was already there but now it’s hard work. But it’s also a lot of fan because now I am building again something right from the scratch. It would be cool to be as huge as Journey with The Dead Daisies but for the time being I am absolutely happy that I am a working musician. Time will tell (laughs). 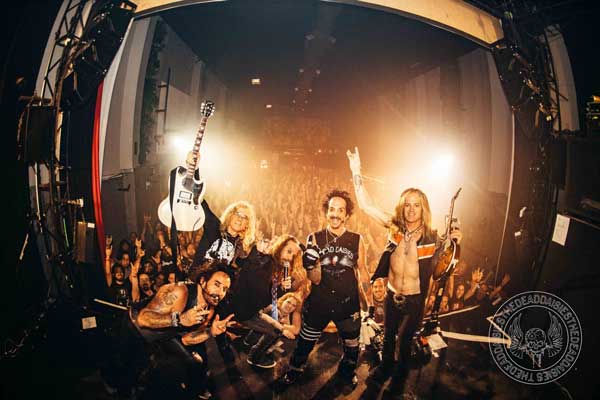