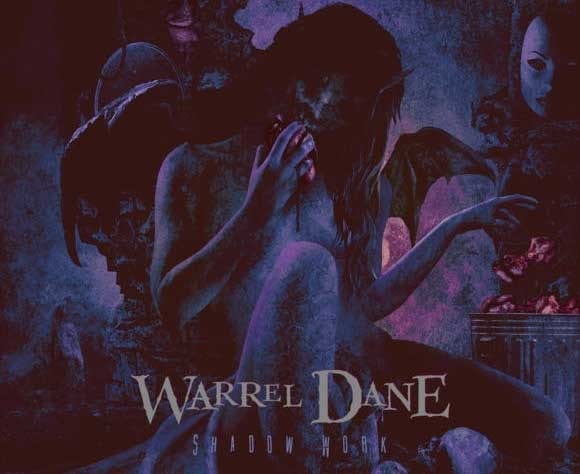 On December 13th, 2017, the worldwide metal community mourned the passing of a truly unique voice, an extremely gifted songwriter, and above all a wonderful human being, that will be dearly missed: WARREL DANE, who died of a heart attack during the recordings of his second solo album in São Paulo, Brazil.

Renowned for his work in Sanctuary and Nevermore as well as a solo artist, in 2014 Warrel had teamed up with Brazilian musicians Johnny Moraes (guitar), Thiago Oliveira (guitar), Fabio Carito (bass) and Marcus Dotta (drums) as his touring band and ultimately this successful collaboration led to plans for a new studio album. Recordings for “Shadow Work”, the follow-up to 2008’s “Praises to the War Machine”, started in fall 2017 at Orra Meu Studio, São Paulo, and Travis Smith commenced to create the artwork following a concept and ideas previously discussed with Warrel.

Then he passed away, left his fellow musicians, fans, friends and family as well as his label in shock putting the status of “Shadow Work” in limbo for a while.

After reviewing the material that could actually be completed using vocals from various studio and pre-production sessions with Warrel, the decision was made to release his final recordings as “Shadow Work”

“We are looking forward to release these 40 minutes of music in October. We and many other workmates at Century Media Records have known Warrel for years, have been through thick and thin, and are fans of his art just like the many, many people supporting him since the 80s. The dedication his band, Travis Smith and our team invested in completing “Shadow Work” was astonishing and the entire record carries an eerie atmosphere of Warrel already feeling that this might be his last work. It is heartbreaking that he was right in the end. Rest in peace, friend.”

“Shadow Work” will be released as Special Edition CD Mediabook offering a 44-page booklet, as Gatefold LP plus CD and 12-page LP booklet and on all digital platforms. Each song is illustrated by Travis Smith’s art, created as his personal tribute to Warrel and further explained in his personal liner notes. Furthermore, photos, lyrics and moving statements from the musicians are included as well.

“He told me he wanted the cover for this one to be a personification of one of its songs, affectionately titled ‘Sweet Madame Satan, and why’. I dug up the skeleton of an old idea we’d talked about once before, and with a few details and alterations of his own, it was exactly what he had envisioned. He “loved it”, approved it, and then gave me an outline for what he wanted to do for the back cover to compliment it as a sort of prologue.

I finished the additional artwork taking inspiration from old conversations, titles, absorbing passages from his notebooks, and some lyrics that he’d passed along earlier.  …Thank you for everything these past 20 years… It was an honor. It will be missed. You are missed. I know we did you proud.” Travis Smith

“To give birth to a work like this, is for us a tribute to someone that was like family and honour his memory by sharing some of the savage poetry that he created and was ultimately so proud of.

Warrel came into our lives like a storm, took us into a very intense ride, we roamed endless roads into the unknown, into places that we never dreamed of both inside and outside our minds, and left. He was someone who lived with us, dreamed with us and enjoyed our hospitality, and in return gave us so much back. Some of us acted like his mother, some of us saw him as a father figure, some of us took care of him in some of his darkest moments. Yet, he was a friend, and somehow, will be always there.

To record such an album, and to work alongside an artist as gifted as Warrel, is somehow like being enthralled by his brightest light, and, at the same time being engulfed by his darkest shadow. There is so much to say, and yet nothing to say. In the meantime, we are proud to share this portrait of the storm we went through in form of art. Light, peace and love.”

A first song and presales will be available August 31st, 2018.

4. As Fast as the Others

6. The Hanging Garden (The Cure cover)

8. Mother is the Word for God