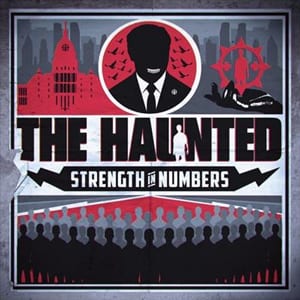 It was four years ago when The Haunted changed once more their line-up. Peter Dolving left again and was replaced by Marco Aro for the second time. Anders Bjorler quit too and Ola Englund took his place while Adrian Erlandsson came back into the band replacing Per Jensen. With this change, the experiments in their sound went also away, something that was clearly shown in their previous album “Exit Wounds” from 2014.

Its successor continues in their known style of death/thrash metal with the difference that it’s a lot better. “Strength In Numbers” reminds me a lot the sound of “One Kill Wonder” with Aro spitting out his guts in the microphone and the Slayer-like riffs cutting like razors, which seem to have the signature of Ola. The production is also better and it has less songs from its predecessor making it more direct to the listener. It’s obvious that the band did a better job in composing the songs as they managed to record a killer album. “Brute Force”, “Preachers Of Death”, “This Is The End” and “Tighten The Noose” (I could right all of them, but anyway) can confirm that.

The Swedes continue dynamically their discography, showing that they still have a lot of great stuff to present us. All of you who enjoyed mostly the Dolving era, you’ll probably bypass it. But all of you who missed their old sound and couldn’t wait for them to return there, you will bang your heads until your neck starts to hurt. After listening to this album many times, I have to say that the only bad thing about it is the weird cover. But you can’t have it all, can you? Thrash on!