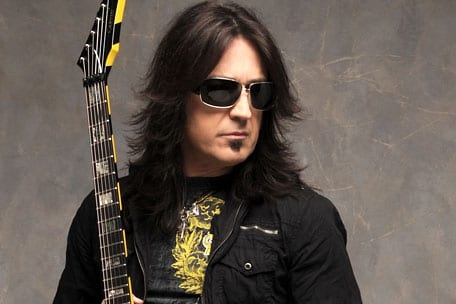 Stryper’s frontman Michael Sweet talked about the most disappointing album he hasheard in the last few years:

“I’m gonna go with the VAN HALEN album [2012’s ‘A Different Kind Of Truth’], the one before the live one. I’m a huge VAN HALEN fan — about as big as they come — and I’ve always loved the band and everything. And I just feel like the last album… You know when you feel like a band is just going through the motions and they’re just not giving it their best? That’s what I felt with that album. It got some really good reviews — people were saying, ‘This is great. This is great’ — and I’m just kind of sitting there reading them, thinking, ‘Okay, I’m hearing something completely different than these people are hearing, apparently.’ And I have absolutely no clue what I am talking about, because I just didn’t get it. I didn’t get it. There’s qualities there that you’ve come to expect that are still there that you love — you know, Eddie’s [Van Halen] playing… Eddie could play two notes and cause chins to drop, ’cause he’s Eddie. But… I don’t know, man. I’d love to get hold of those guys, man, and take them into the studio and take them back to the old-school days and help them make an album that, basically, is comparable to ‘Van Halen’ and ‘II’. That’s what I’d like to hear, and I know they can do it, man. It’d be killer. They’d probably have a platinum-selling album if they did that.”