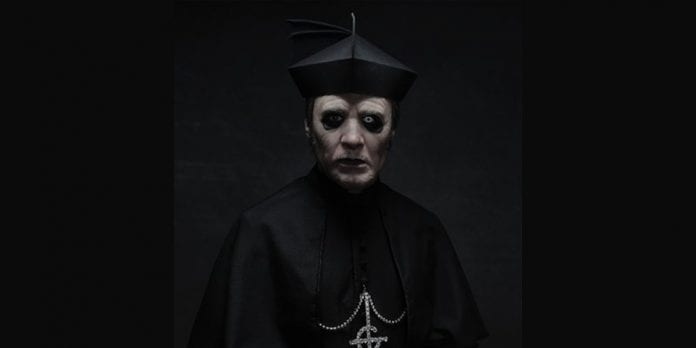 GHOST played a short acoustic set at a private event in Chicago Friday night (April 6) premiering the band’s upcoming album. The three-song performance included the debut airing of the disc’s first single, “Rats”, which opens the album and is expected to be made available later this month. It was also the first time GHOST performed with its new frontman, who is named Cardinal Copia and apparently isn’t a part of the Papa Emeritus bloodline.
The last Papa, Papa Emeritus III, was forcibly taken from the stage during the final show of the band’s “Meliora” tour cycle last fall, with Papa Zero arriving to announce the beginning of “the Middle Ages.” Of course, all the Papas — except the elder Zero — and Cardinal Copia are the same man, GHOST founder and vocalist Tobias Forge.
Forge’s new alter ego will make his official live debut on May 5 as the Swedish band kicks off a run of North American dates in Riverside, California.