The career of the legendary Praying Mantis band had lots of ups and downs. Since the forming of the band by brothers Chris and Tino Troy (of Greek Cypriot descent) in 1974, countless members came and went and the group was forced to get back on its feet, lick its wounds and get back in action. The current line-up remains intact for more than five years in a row and two studio albums in-between and it certainly seems that the guys are finally on a steady course and sound artistically rejuvenated. Since the Mantis is going to prey on the Athenian audience on the 2nd of March at Crow club, we are going to take a quick look on all these times the group had to reinvent its existence in this 45 year period. 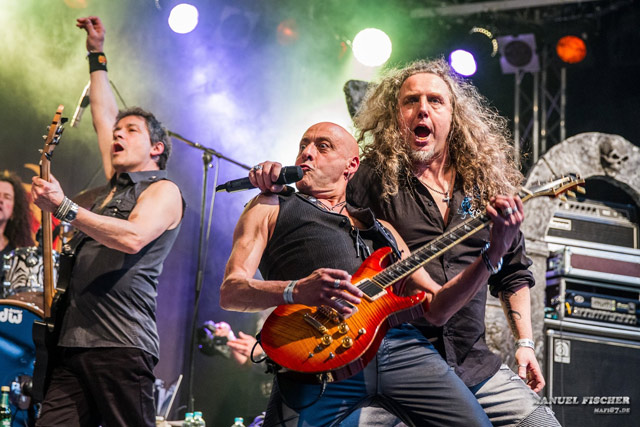 The important Arista Records label gave the band the chance to release the historic Time Tells No Lies debut album in 1981 but this collaboration didn’t last long. The equally famous Jet Records label signed the band immediately afterwards but this wasn’t a fruitful marriage either. The Troy brothers face great disappointment and decide to put Praying Mantis on hold while investing on a new beginning under the Stratus moniker in 1984. Throwing Shapes album features vocalist Bernie Shaw (Uriah Heep) and the late Clive Burr (ex-Iron Maiden) on drums. A quality recording that once again failed to generate deserved success. This third consequent failure led to disbanding and the brothers fell off the radar for quite some time…
The great comeback occurred in 1990 when the band was resurrected in order to satisfy the demand of the Japanese audience that never abandoned Praying Mantis. During this tour, Dennis Straton (ex-Iron Maiden) will become a permanent member of the reformed group and will hold this position for 15 consecutive years releasing 6 studio albums and one EP. This makes him the longest lasting member. But on the other hand, on the vocalist slot we encounter the complete opposite situation counting 7 different frontmen on these 7 releases let alone those who didn’t get to record something with the band. All these changes presented several challenges with the most significant being the lack of a steady core that would allow touring. The curtain dropped once again in 2003, right after the magnificent “The Journey Goes On”.

The silence broke in 2008. The band hit the road with great enthusiasm and a brand new line-up and in 2009 reentered the studio for “Sanctuary”. This era brought the valuable addition of Andy Burgess on guitar who is definitely looking to surpass Straton, already on his 11th year as a bend member. The Dutch rejuvenating addition occurred in 2013 with the hiring of singer John Cuijpers and drummer Hans In’t Zandt. This is the line-up that we are going to encounter on stage in a concert of undeniable quality and class, having their 2016 appearance on the Chania Rock Festival as our guide. 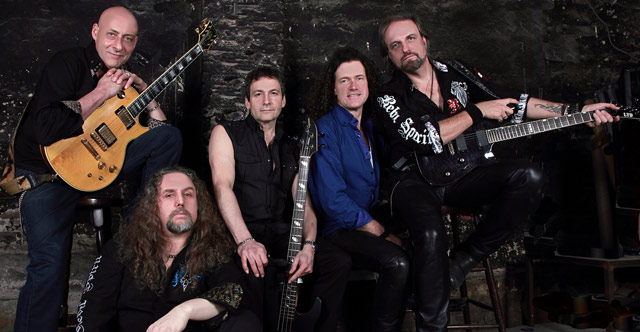