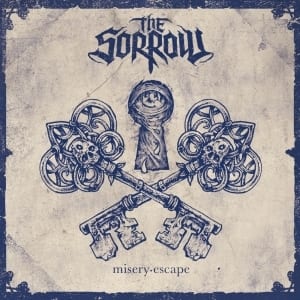 Austrian band The Sorrow was born in 2005 and this is their fourth completed piece of work. Despite their origins there is nothing European about their sound, which is obviously inspired by metalcore and New Wave of American Heavy Metal bands from the other side of the Atlantic over the last decade. Their sharps riffs and catchy choruses don’t really differ from the latest work of As I Lay Dying, and the growl – clean vocals harmonies used thoroughly by The Sorrow are reminiscent of Trivium.
Even though they don’t deserve much credit for originality, there are some good tracks on the record, such as ‘’Escape’’ and ‘’Burial Bridge’’ where in some spots the guitars flirts with melodic death metal. In the second half we meet more mid tempo based atmospheric efforts, like ‘’Buried in the Deep’’, ‘’Dead Home’’ and ‘’Follow the Lights’’ that make the whole album better by offering variety. Like in every musical trend there are three categories of groups: the pioneers, the copycats and the middle class with solid albums that don’t impress, in which The Sorrow belongs.