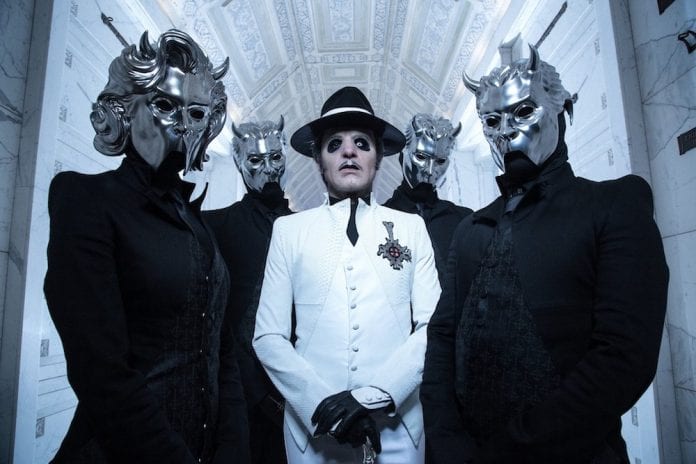 GHOST leader Tobias Forge says that his legal battle with several of the band’s former members “needed to happen” in order for the group to move forward.
Back in April 2017, Forge was sued by four ex-members of the Swedish act who accused Forge of cheating them out of their rightful share of the profits from the band’s album releases and world tours.
The lawsuit, which was filed in the district court of Linköping, Sweden, where GHOST was originally based, claimed that Forge solely controlled the band’s business affairs without input from anyone else in the group. The four musicians furthermore stated that a partnership agreement existed between them and Forge which put Tobias in charge of carrying out the company’s management duties.
Tobias responded that “no legal partnership” ever existed between him and the other members, that they were paid a fixed salary to perform as his backing band, and that they were essentially session musicians. More than a year after the lawsuit was filed, Forge is taking a pragmatic view of the situation, which played out in public and forced him out of the shadows.
“All things considered, a year down the line, having been through so much turmoil, I’ve come to realize that what happened needed to happen,” he told NME in a new interview. “Also, I’m a big fan of rock, of rock history, and I’ve read every classic rock biography of every band I’m a fan of. You know what? The same shit takes place in every single one.