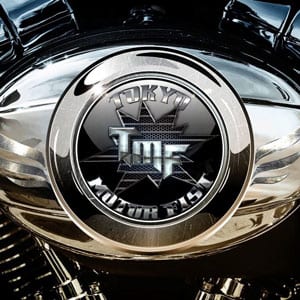 Tokyo Motor Fists and Fontiers… Let’s see who are the players… We’ve got Poley (Danger Danger, Burgi (Rainbow, BOC), Brown (Trixter) and Greg Smith (Nugent, Rainbow). We are talking about a super group and given that Frontiers specializes in AOR and Hard Rock we know what to expect. Let’s listen to the songs then… “Pickin’ Up The Pieces” opens the album and is a nice catchy AOR song, more in the style of Trixter. The next tracks “Love Me Insane” and “Shameless” are in the same mood. The ballad following is just called “Love”.

The other songs are more or less in the same level: memorable and easy to remember melodies, pleasant and cheerful vocal and choral parts that seems very light to me. You would expect from the group’s name a punch in the stomach from strong compositions, but they are a little bit more predictable than I had anticipated. This album would sound pleasant during the summertime, but I‘d rather listen to an album with more guitars and different attitude. “Tokyo Motor First” is highly recommended to those who want a ride with their girlfriend and something in the car that will not sound annoying.