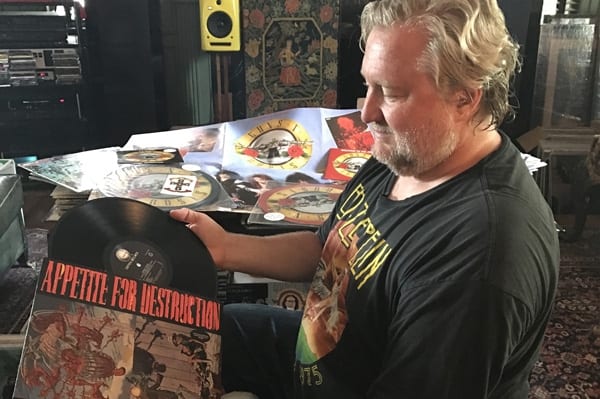 “Appetite Of Destruction” celebrates its 30th anniversary and LA Weekly did an interview with producer Tom Zutaut, who worked on the legendary Guns’n’Roses debut album. About the album’s release delay Zutaut said:  “They were writing, and I kept telling them that they needed that one song that would define them and take them to the top. They kept asking me what that was, and I said I’d know it when I heard it. I couldn’t help them write it, but as an A&R person, you always have a lot of say on the first album.”

Obviously, that song was “Sweet Child O’ Mine”: “I knew right away that it was the missing song before booking them studio time. And it worked because it wasn’t a traditional, formulaic power-ballad. It was seven minutes long and nobody saw it as a single, but I knew it was going to be No. 1 on Billboard. We had “November Rain” and “Don’t Cry” before we even recorded Appetite, but I didn’t feel like those were songs you would put on a debut. They needed to start with an honest punk statement. Those ballads were overly complex and could alienate their audience outside of L.A. with the image of Axl behind a grand piano. Axl understand that better than anyone. He wanted GNR to start off punk, to counter hair metal.”

As for the wild lifestyle and excesses the band was famous for those days the producer comments: “Well, think about it like this: While the rest of the band was living in a squalor at the Hell House, Axl had a room with a padlock on it that was pristine. He stayed away from the chaos and was sober as a church mouse and overthought everything. But that dichotomy worked because Axl would hear the work, sing through it, and make the changes. Everything had his final say on it. But initially, Izzy had a lot of the ideas. He was the primary creator of the Appetite sound, Slash’s monster guitar riffs were the icing, Duff’s complex bass parts were played like a lead guitarist, but every word and arrangement had Axl’s fingerprints all over it because he was the band’s quality control.”

When he was asked if there’s anything he’d like to change on “Appetite…” Zutaut replied: “I wish we had put “Reckless Life” on it. But that was an argument I lost. I think it might have had to do with the fact that Chris Weber co-wrote it, and it would have led to a publishing issue. But that song belonged on the record.”