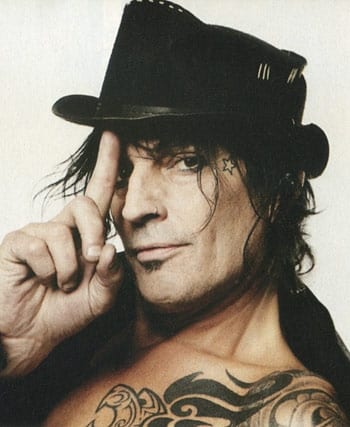 After publicly revealing injuries he says he sustained at the hands of his 21-year-old son, former Mötley Crüe drummer Tommy Lee has bid farewell to social media, saying he “Can’t read anymore liesss.”
As previously reported, Lee posted a picture of himself with a swollen lip to his Instagram feed, telling followers it was the handiwork of his son Brandon. Local police confirmed that they’d been called to Lee’s residence, where Brandon had reportedly been living part-time, and Lee was ultimately checked into a nearby hospital. Tabloid network TMZ suggested alcohol had been a factor, quoting sources who said Brandon had been acting in self-defense — something Lee quickly and angrily denied.