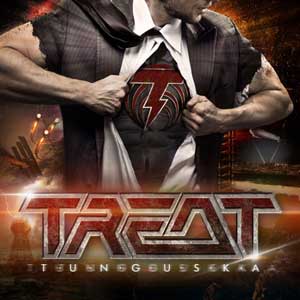 In 2006 we witnessed the anticipated reunion of the Swedish Treat and since then we have enjoyed two unique albums, “Coup de Grace” (2010) and “Ghost of Graceland” (2016). According to the guitarist, producer and founder of the band, Anders Wikström, the title of the new album “Tunguska” means “the last piece of the puzzle that has entered the right place”.

The album awakened the need to listen to “Coup de Grace” once again, as several tracks could be its sequel. I would call it “Coup de Grace” Vol. II, because I honestly think that this album was a milestone in their career and in 2010 made the big difference between other great releases. The introductory piece “Progenitors,” predisposes you for a record with unique melodic hits and excellent melodic harmonies with a Treat signature that you can hardly find in another band. Of course, the above words are confirmed with “Always Have, Always Will” and “Rose of Jericho”. Songs that will surely be played live again and again.
“Build The Love” and “Tomorrow Never Comes” besides being full of beautiful emotions, are made for radio air play. Sincerely, I keep asking myself, where are all these radio producers to give airplay to such amazing new albums that are being constantly released? Because without airplay all these bands give unfair battles! Apparently AOR & Hard Rock music is music that everyone can listen to but not everyone can appreciate, which does not bother me as much as the fact that bands like TREAT play live in front of 300 people, while they should play for 3000. And I can also confirm after 4 times I have enjoyed them, that they are impeccable during their shows. So what happens and all these melodic rock bands are lost? Because if you open the radio stations in every country, they repeat the same and the same, as if music is over.

“Tunguska” awakened the melancholy inside me, as it may seem with my words above, but once again, a unique melodic album comes out and I’m afraid it will go unnoticed. However, those who are still in touch with this genre, will have the opportunity to listen to a lot of the above songs and the oldies in their live on October 20, when they will visit our country for the first time at the Crow Club.