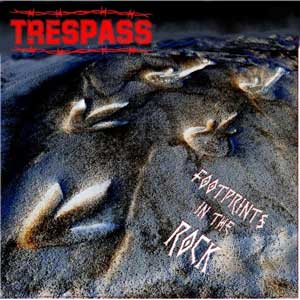 British “Trespass” who are the composers of NWOBHM’s well-known and immortal anthem, “One Of These Days” were re-energized recently and released a new album in 2018 “Footprints In The Rock”. With their founding members Mark Sutcliffe on guitars and vocals and Fawcett on guitars, they continue what they left behind in the early 1980’s. Today Trespass are playing good quality NWOBHM with more contemporary elements and all those features that influenced huge bands of today like Metallica. Of course there’s light years between the 2010’s and the’ 80s and although NWOBHM as a movement has been revived in the last 4-5 years, it does not have that glamor of the past and there are no bands like Saxon, Iron Maiden and Def Leppard,popping up anymore. The songs on “Footprints In The Rock” I would say that are a bit monotonous and uninspired, but since I’m a big NWOBHM fan, therefore biased, I listen to it very pleasantly. Very strong tracks are the opening “Momentum”, the melodic “Mighty Love” and “The Green Man”. It is recommended to fans of the genre that they want to recapture the mighty eighties and generally to fans of rigorous, classic and heavy metal sound.